Galaxy Chocolate in the 70s and 80s

Galaxy is Mars' rival chocolate bar to Cadbury's Dairy Milk. It is my favourite of the two, and while I also adore the latter, the unrivalled creaminess of Galaxy makes it a winner in my eyes. Of course, the 1980s chocolate bars were substantially larger (150g compared to 110g for today's equivalent bar), and yet, there were less obese people around. So that kind of tells you something doesn't it? Don't blame chocolate, blame your sedentary lifestyle! Well, that's my excuse these days for devouring an entire bar in one sitting! 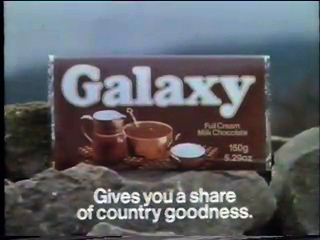 There are many different Galaxy bars on offer roday, Ripple, honeycomb crisp, Minstrels, Counters, crispy and cookie crumble. Today it costs at least £1 for a big 110g bar, but it was 18p to 20p for 150g during the 80s. There were smaller 50g bars, which are now 48 grams.
Obviously, the packaging looked different back then, and I actually prefer the older wrapper which featured a mouthwatering pan of liquid chocolate which I just wanted to plant my entire face into. In the 80s, Mars used the slogan "gives you a share of country goodness", which I'm pretty sure wouldn't be allowed today due to its high sugar content. But you could get away with a lot more back then, of course. In the 70s, I remember there were 1/2 pound bars (226 grams). Today, you can buy a 360g bar from Amazon, although the price is a whopping £6.15. 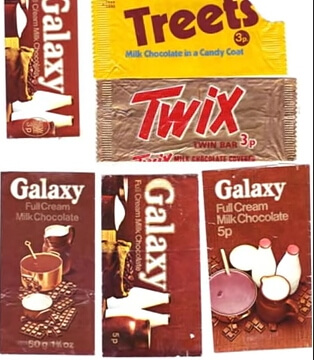 Galaxy was launched by Mars in the 1960s, and had a ghastly yellow and blue wrapper. This was changed to the brown wrapper in the 70s, and although there were various designs, they all featured milk jugs and the aforementioned copper pan of melted chocolate. After decimalisation kicked in on 15th Feb 1971, you could purchase a bar for just 5p.
Today, Galaxy is the second best-selling chocolate bar in the UK, with Dairy Milk taking the top spot. 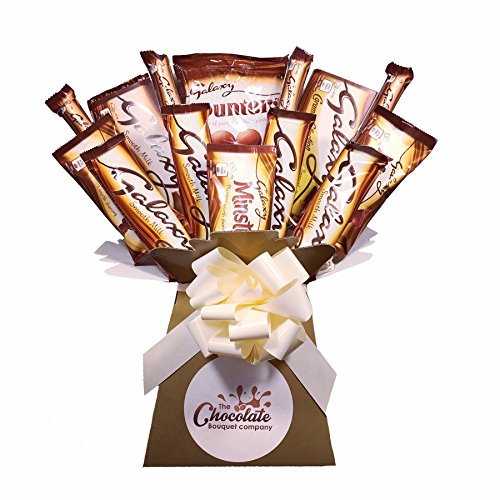