Centipede was one a very few games from the early eighties that had a large female following. It was programmed and designed by Dona Bailey (one of the very limited number of women programmers from this era) and Ed Logg, who also helped to develop the sequel Millipede, as well as other popular Atari games such as Asteroids and Super Breakout.

There were many unofficial clones of the game including Aqua Attack (for the BBC computers), Bug Blaster (for the C64 and BBC/Acorn) and Mushroom Alley (C64). Milton Bradley (MB) Games also produced an official Centipede board game.
The game brings back many fond gaming memories, and I used to spend many an hour playing Centipede on my Atari 800XL. It came on a ROM cartridge (remember them?) which you simply plugged into the slot in the top of the machine.
Of course, there was no waiting around for fancy intros and video sequences back in the 80s, and you simply got on and enjoyed playing the actual game. That is, unless you were loading the game from a tape deck, of course, in which case you could be waiting around for up to 20 minutes, or forever if you didn't clean the tape heads!

The video clip above features a review of the arcade coin-op game. I'm not sure I ever played on one of these, but I'd really love one in my games room. Actually, I'm not rich enough to own a games room - it's just a spare room full of junk - but it sounds better! 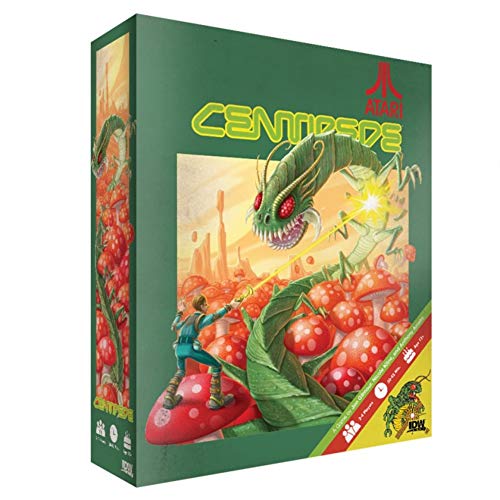 Atari Centipede Board gameBUY from AMAZON

Centipede is a fixed screen shooter game in which the player controls a bug blaster shaped like an insect head. On the arcade version, the player uses a trackball, rather than a joystick, to control the blaster, with a separate fire button to shoot the centipede, which advances from the top to the bottom of a screen full of scattered mushrooms. Shooting the middle segments of the centipede causes it to split into two, making the game harder to play, so the player needed to use his or her skills to shoot the outer segments first. The mushrooms take four shots to destroy earning the player 1 point. Destroying the head of the centipede earns the player 100 points.
Other insects also need to be dealt with. Fleas drop rapidly from the top of the screen and will destroy the bug blaster if it runs into them. Spiders will occasionally appear and move around in the bottom segment of the play area eating mushrooms, and the player can earn up to 900 points for killing one if it is very near when destroyed.
Scorpions are worth 1000 points if destroyed and appear at random positions for a brief period,  moving horizontally and making any mushroom they touch poisonous. If the centipede comes into contact with one of these mushrooms, it will suddenly move quickly towards the bottom of the screen.
The player gains a new life for every 12,000 points.
More Games
Alien Intruders