Almost everyone who had a home computer or games console back in the 80s will have played the platformer Donkey Kong at some point. It was certainly the first and only game to feature a love triangle between a carpenter, his girlfriend, and an angry gorilla!
You'll be pleased to know that you can have another go now with the free flash game below. Use the arrow keys to move Mario/Jumpman over girders and up ladders. Press the space bar to leap over tumbling barrels, dodge lethal fireballs and jump onto fast-moving elevators, trying to rescue Mario's girlfriend, Pauline, from Donkey Kong.
Apparently, the name Donkey was chosen instead of King for copyright reasons, and because game designer Miyamoto intended it "to convey a sense of stubbornness". Indeed, Universal Studios tried (and failed!) to sue Nintendo after the game's release.

There were a huge number of conversions, such as the Game & Watch version shown below, although some ports were pretty terrible, such as the Coleco port for the Atari 2600. Donkey Kong was first released by Nintendo in 1982, and it features the very first appearance of Mario, although he was known as 'Jumpman' at the time.
Donkey Kong was the first true platform game to hit the arcades, and became hugely popular. It was quite advanced when compared to other games released during the period, and made the maze game Pac-Man (released in 1980) look simplistic. As with Asteroids, I remember that I always found the game to be extremely challenging, and struggled to even get through the first level!
The first arcade platform game was actually Space Panic by Universal Entertainment Corporation, although the main character did not jump (he dug holes) and the game was not a commercial success. 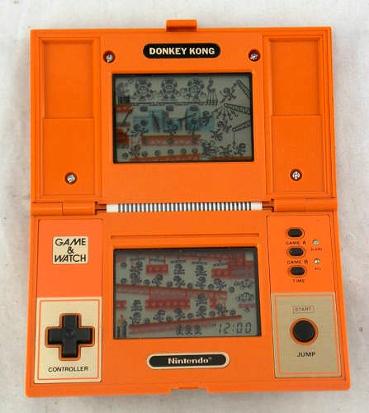 Nintendo Donkey Kong Game & Watch hand-held console from 1982
In 1982, Nintendo released the sequel Donkey Kong Jr. to the arcades, and this was ported to most consoles during the 80s, including the NES, Atari 2600, Atari 7800, Intellivision and ColecoVision.