This excellent version of the original 80s classic Space Invaders features authentic graphics and sound from the arcade version. I remember playing this at the local Youth Club back in the early eighties. However, although I thoroughly enjoyed playing it, I always struggled to get a decent enough score to get on the high score table - maybe you'll do better than me!

INSTRUCTIONS: To start the game below, use your mouse pointer to select "Yes, I understand" and then select "Play Space Invaders". Use the left and right arrow keys to move, and the space bar to fire! Avoid hitting your defences, and destroy those pesky invaders before they reach you. Have fun!

One of the best memories many people have about the game is that menacing sound loop that gradually increases tempo. It was like an electronic version of the Jaws theme music and helped to create a sense of danger and urgency, and it was highly influential. The game was simple to learn, but hard to master, and this concept helped many video games from the era to become massive hits. 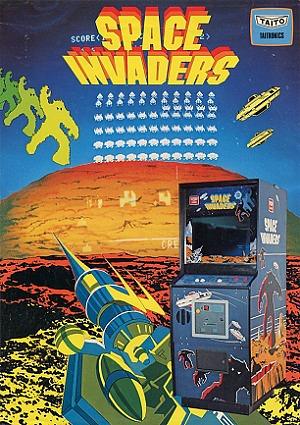 This promotional flyer by Taito Corporation was used to promote the Space Invaders arcade machines in 1978. The game was a phenomenal success, with 300,000 arcade cabinets sold in Japan alone within two years. Global profits amounted to around $500 million for Taito.
Space Invaders was an incredibly influential game, and the Atari 2600 (VCS) port (released in 1980) was so well-received that people actually bought the console just to play the game - around 2 million copies of the game were sold just in the first year! This was the very first game that actually fuelled sales of a console, and came many years before Super Mario Bros increased sales of the NES console.
The 2600 version also came with many extra options. Firstly, there was the addition of colour, and this was the first true coloured version of the game. There were 112 game variations that could be applied, such as changing the width of your cannon or the speed of the missiles which made the game more or less challenging. 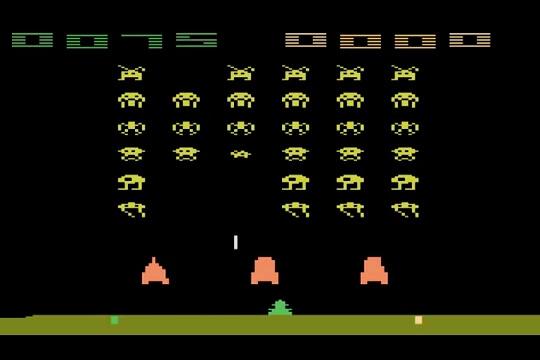 The original game helped boost the popularity of arcade cabinets, and helped video gaming move into the mainstream. However, I remember that after a couple of years of heavy usage, the cabinets (complete with cigarette burns) started looking shabby pretty quickly, and the game itself became dated, too, with new arrivals such as Galaxian, Asteroids and Defender offering something slightly more advanced.
Many people forget that Space Invaders was a game that was impossible to win. It was infinite, meaning that you were going to run out of lives at some point. It sounds pretty crazy now that a game that the player can't win was so incredibly popular! But back in the 80s, it was getting onto the high score table that became attractive. There was nothing more rewarding than seeing your initials displayed on the screen, and the addictiveness came from beating your rivals to the top spot.

The Invaders for Android