For this post, I'm going to review not only the original arcade version of Moon Patrol, but also the Atarisoft versions which were ported to the many popular home computers and gaming consoles of the time, including the Atari 2600, XL/XE, Commodore 64 and Apple II. Plus, you can actually play a free online version of the game on your PC, Chrombook or Android system above!
The original version of Moon Patrol was created by the Japanese video game developer Irem, and was released as a coin-op arcade game in 1982, and distributed by Williams Electronics in North America. Irem also went on to create one of the earliest martial arts/beat-em-up games Kung-Fu Master in 1984, and also the classic 1987 scrolling shooter R-Type.
The side-scrolling space shooter game was very successful in the arcades, and became one of the top grossing arcade games of 1983 in North America.

The overall aim of the game is pretty simple; Jump over the craters and shoot your way out of trouble for as long as you possibly can without losing all of your lives.

The player takes on the role of a lunar city police officer, and is in control of a moon buggy driving on the moon's surface. Well, I guess that's what moon buggies are for! There are several hazards and enemies to avoid - craters, rocks, mines, firing tanks and two different UFOs which fly above you. One of the UFOs leaves a crater when it fires down, making the player's journey even more perilous.

If you're not very good at multi-tasking (like myself) then you are likely to struggle with this game. It can be pretty challenging trying to time your jumps and also avoid or fire at enemies hurtling towards you from the right of the screen and also above you. This is definitely a thinking man's shooter, but as the old saying goes, "practice makes perfect", and after playing a level a few times, you will be able to memorise where many of the obstacles are, as they do not appear randomly, although it's all too easy to have a memory lapse and go plunging into a crater!

Extra lives are given at 10,000, 30,000, and 50,000 points; but after this, no more are awarded, which makes for a tough challenge!. The maximum possible score is 999,990 points, and after this it will simply revert back to 0, although the player can continue playing the game.

Overall, I really enjoyed playing the arcade game back in the 80s, and it had an addictive quality that made it hard to resist inserting another coin and playing one more time, or until you're thrown out of the arcade! It was definitely a thinking man's shooter game. 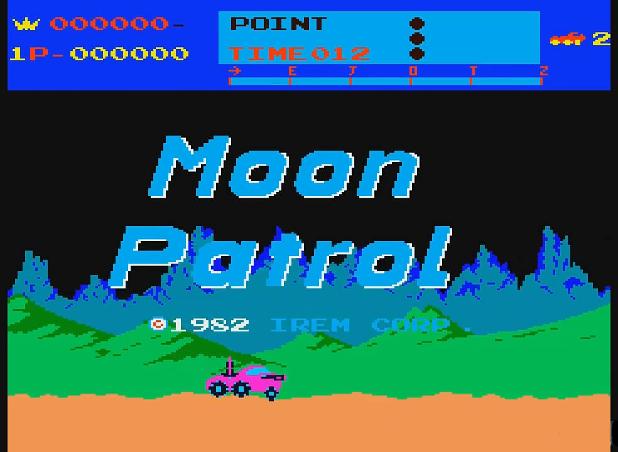 Title screen from the 1982 arcade version by Irem Corp.

Moon Patrol was the first side-scrolling arcade game to feature parallax scrolling, in which three layers move at different speeds to simulate distance, and this looked very impressive in 1982. The animation of the buggy is also excellent, with the buggy appearing to have a suspension system - each set of wheels moves up and down independently from each other as the vehicle navigates the rough terrain.
The graphics are very colourful with greenery or green cities (depending on the stage you're playing) and light brown soil. It's certainly more appealing than Earth's moon in the present time, which is a desolate place filled with nothing but dust and rocks and no atmosphere. The choice of pink for the buggy is interesting, too, but maybe Irem were trying to attract a female audience? The colour changes to red as you progress through the game. 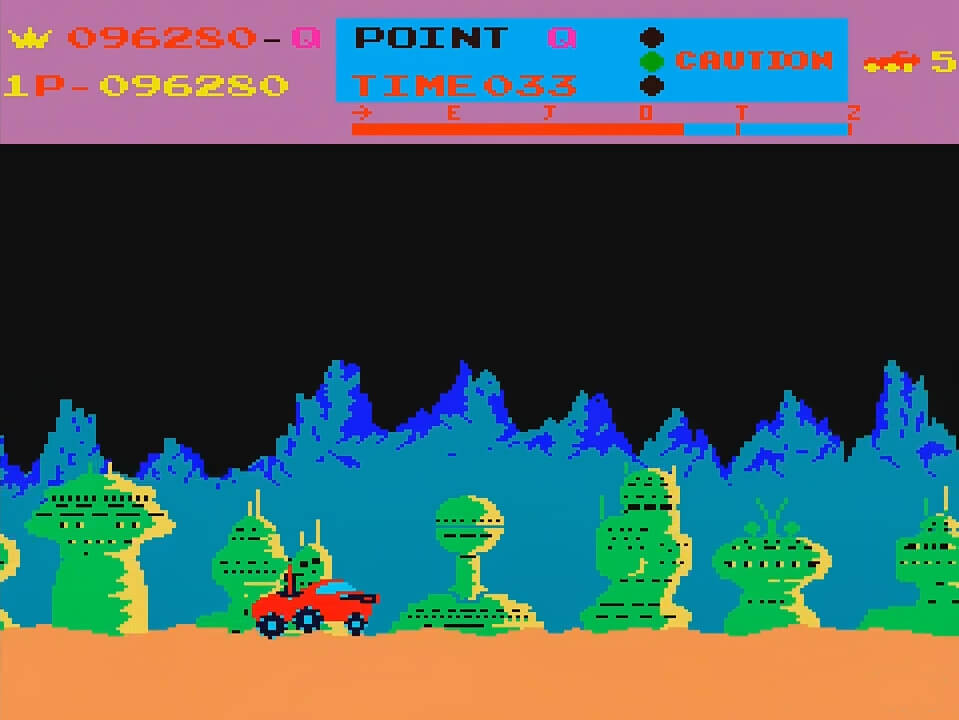 Ports were released on the Atarisoft label for the Apple II, C64, Vic-20, Atari 2600, 5200, IBM PC and Texas Instruments TI-99/4A. The MSX computer version was published by Irem.
The three layers of parallax scrolling on the 800XL version were very fast and reasonably smooth for an 8-bit game. However, I wasn't a fan of the two shades of brown used for two of the three layers - I'm not sure what was going through the designer's heads to pick brown, considering there were 256 vibrant colours to choose from! Nonetheless, the shading of the mountains looked even better than the arcade version, in my opinion.
It's a very long time indeed since I last played Moon Patrol - I think the last time was on my Atari 130XE way back in the late 80s sometime! This 400/800/XL/XE version was created by Atari Inc. It was one of those games that you may put on the shelf for a few months, but then come back to several times a year. Sadly, I can't do that now as my Atari computer was thrown on the scrapheap many moons ago, but, at least, I can play the online versions. 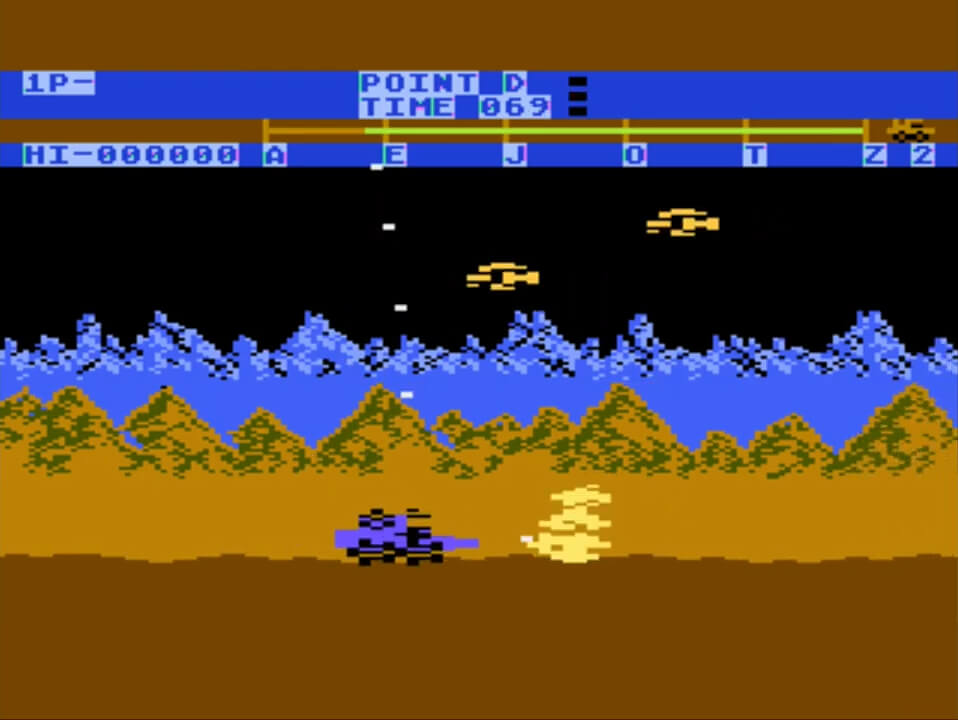 Screenshot from the Atari 800XL version

Below is a photo of the Atari 2600 game cartridge featuring the silver label design that was on their software for a few years during the 1980s. There is also a red label design, although the artwork is the same. The game was ported to at least 20 consoles and computers. Of course, the 2600 version looked very different to the arcade version due to its hardware limitations. The moon buggy loos pretty rubbish and appears to be walking rather than driving, but there are two layers of parallax scrolling. There was music, too, and this was one of the first games for the console to actually feature music.
The gameplay is pretty decent on this version with fairly smooth sideways scrolling. Given the machine's limitations, as far as 2600 games go, it's pretty impressive overall, and a decent conversion.
You can actually play the 2600 version online at RetroGames. 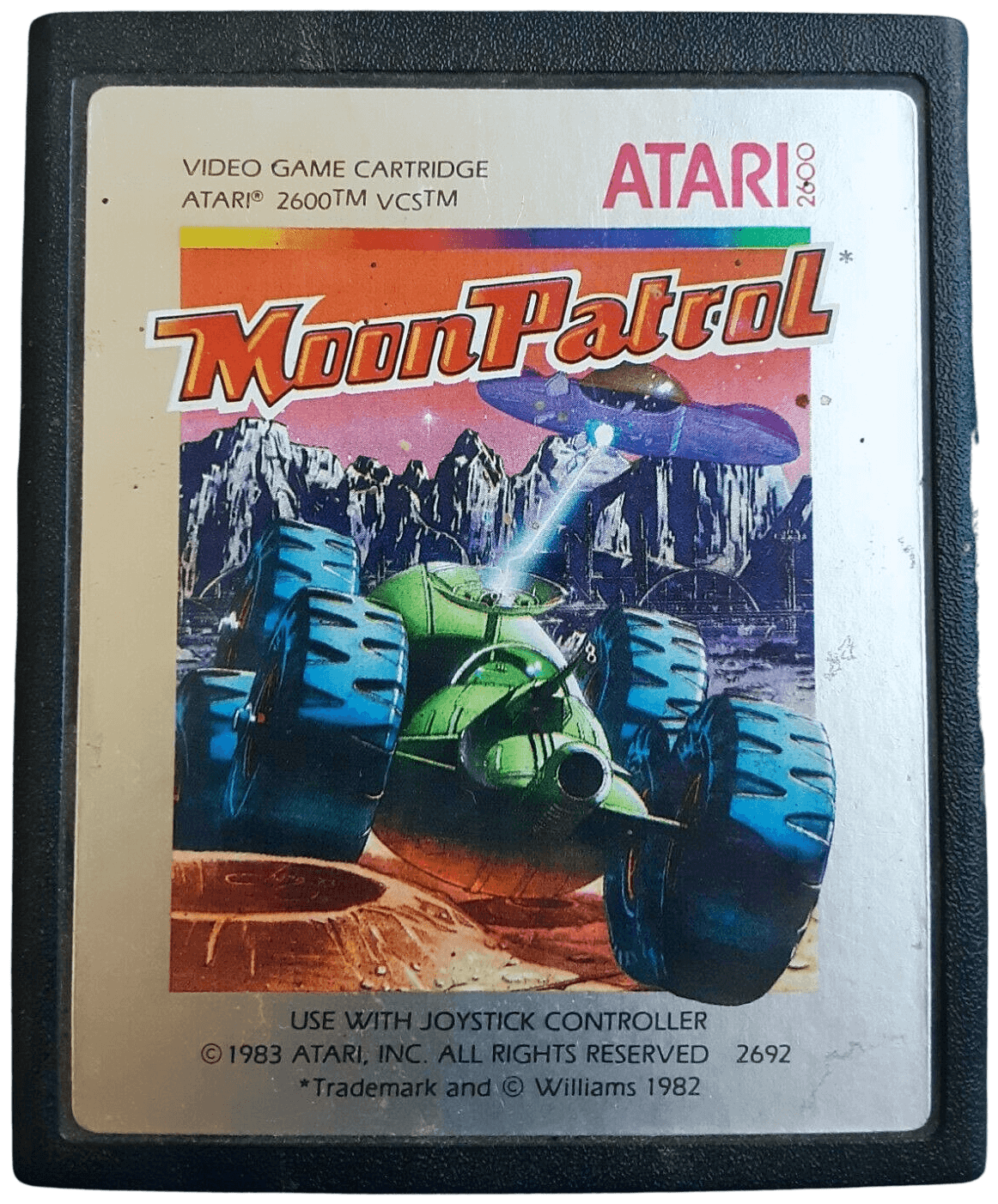 Although the C64 version also features parallax scrolling, the background graphics are rather bland, with the snow-capped mountains looking rather simplistic with no shading whatsoever. In fact, they look like they've been designed by a blindfolded five-year-old! With it's square wheels, the wonky-looking buggy certainly has a quirky design (I certainly wouldn't want to be driving that thing!), but the enemies look more detailed and colourful than the Atari versions, for sure, but this is due to the fact that the Atari sprites have only 1 colour. The sideways scrolling is a little slow, but the actual gameplay itself is about okay, thankfully, and the sound effects are very decent. It just feels though as not too much effort has gone into the overall design of the game. I'm no artist, but even with teh C64's limited colour palette,  I could certainly come up with better landscaping than this! 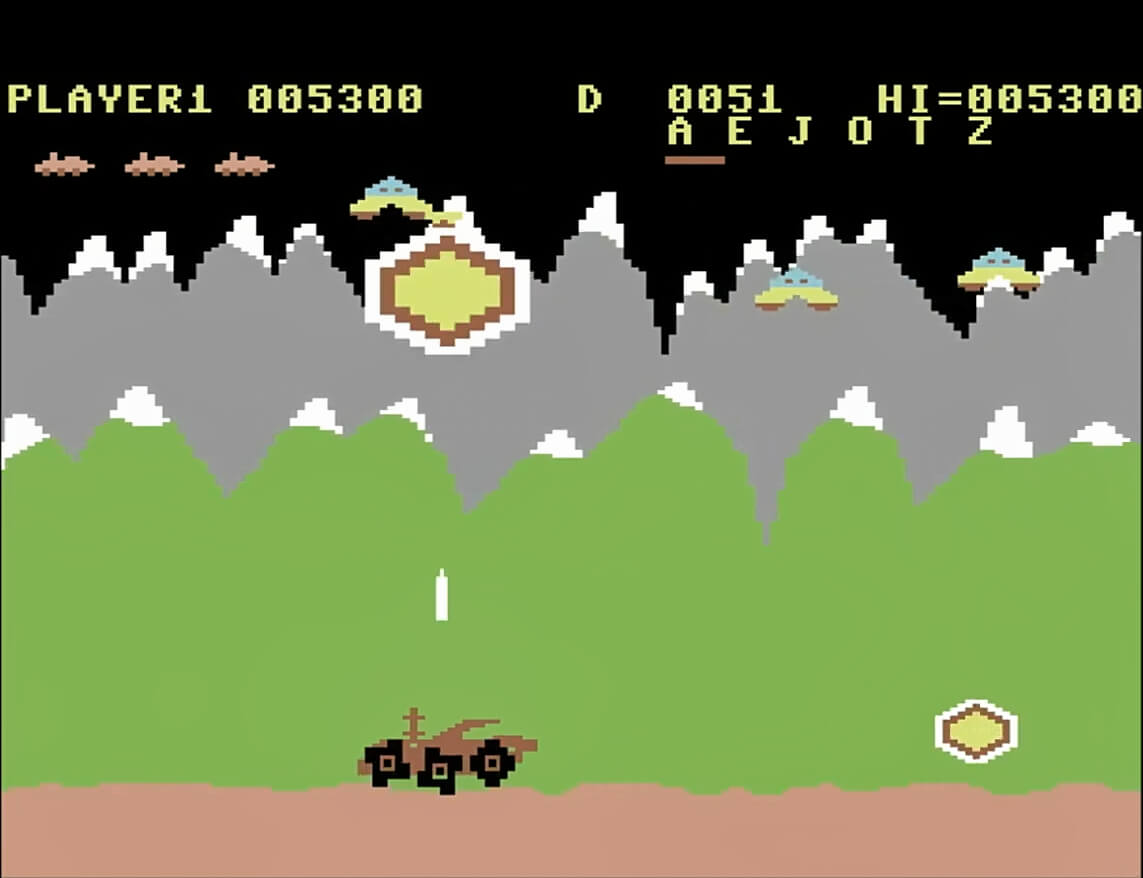 Visually, this colourful version seems more appealing than many of the conversions, although the mountains are even more simplistic than the C64 version. However, overall, this is probably the worst of all the conversions, with poor sound effects, a flickery buggy and juddery scrolling.
That said, it's the limitations of the hardware rather than poor programming that is at fault here. The Apple was really not made for gaming, and can only handle one thing at a time, so the fact that the coders managed to make the game work at all is some achievement! For example, when the machine plays a sound, it stops the graphics in order to do so.
Given all of these limitations, I think the programmers have done a decent job overall. 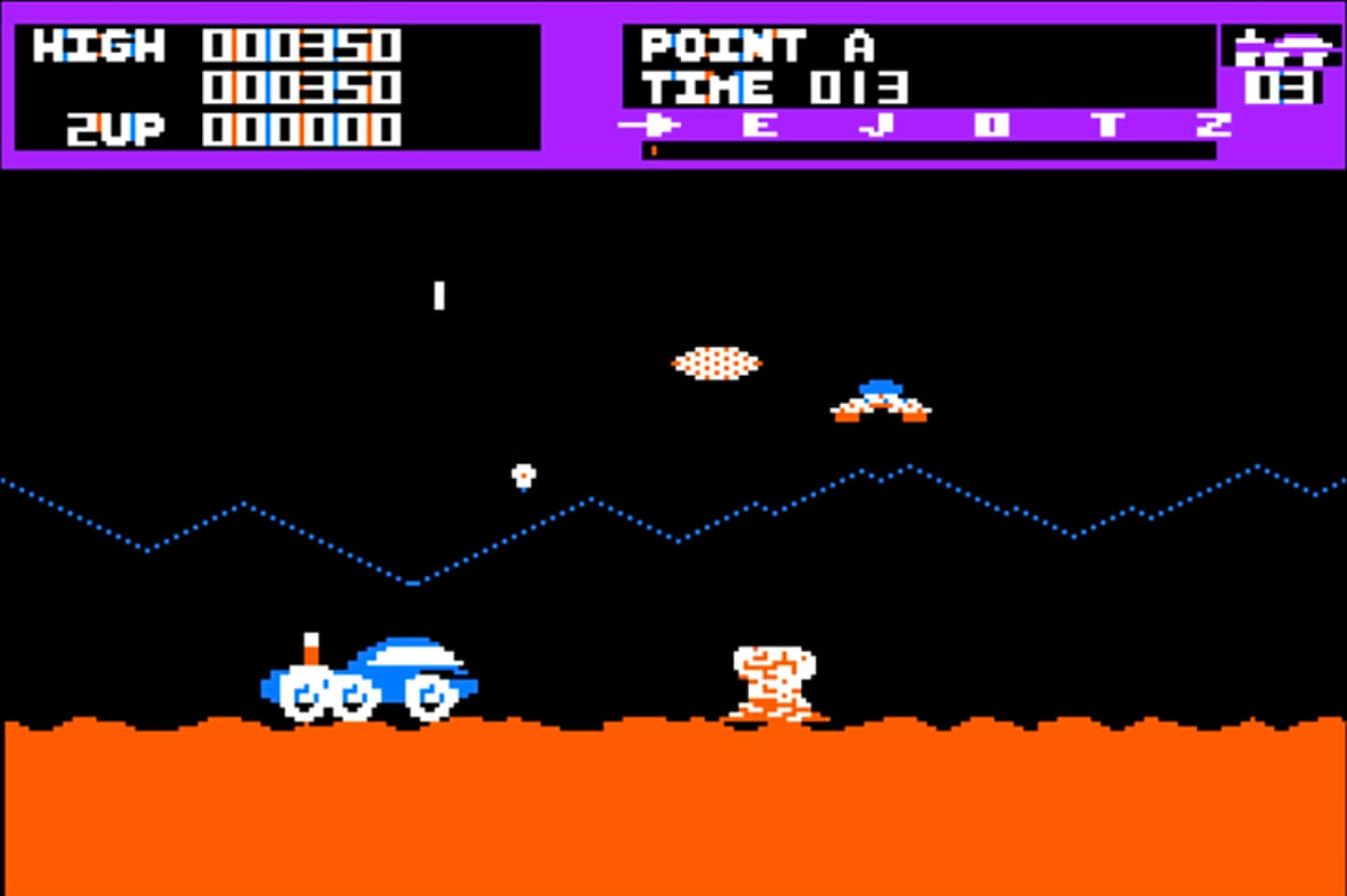 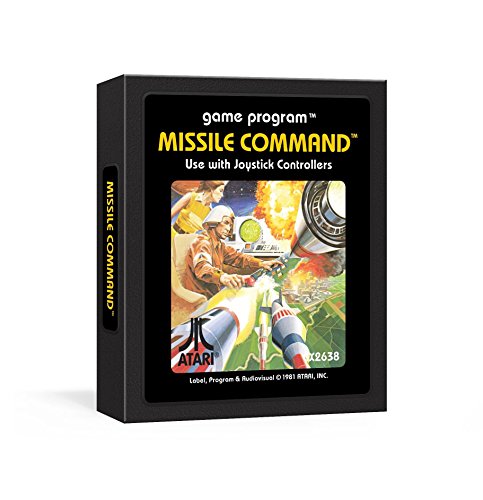