Simon is a very addictive electronic game that was launched in 1978 by Milton Bradley (MB Games). It quickly became an 80s classic, and rather a lot of youngsters received a the toy as a Christmas present during both the seventies and eighties.

The idea, of course, is to remember an ever-increasing sequence of flashing coloured lights and sounds, which makes it a great game for testing your memory - how many rounds can you complete in the free version below?

This free HTML5 version of Simon should work on all devices. The only difference between this and the original game is that the electronic sounds have been replaced by piano notes. 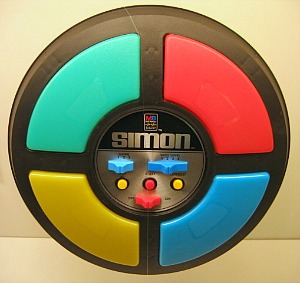 Electronic games were still in their infancy at the time of Simon's release in 1978. The combination of electronic noises and colourful lights was very appealing to children of the 70s, and the toy became hugely successful into the 1980s.
The game was invented by Ralph Henry Baer and Howard J. Morrison, and the programming of the software was left to Lenny Cope. The working title was Follow Me, but the name was changed to Simon, and is based on the children's playground game Simon Says. The toy was originally built and distributed by the family-owned firm Milton Bradley. The 124 year old company was sold off to Hasbro in 1984, who continued to sell it in various forms.
Other versions released included Pocket Simon and Super Simon - the latter featured eight buttons. The mini pocket version was a godsend to parents looking for a way to keep their kids quiet(ish) on a long trip to the seaside!
The first official flash version was released by Hasbro in 2011, but there have been dozens of unofficial clones.
The idea for the game actually came from the Atari game Touch Me, which first hit the arcades in 1974. In this game, the player also had to memorise a series of flashing lights. After the success of Simon, Atari released their own hand-held version of Touch Me, although it never became as iconic.

Axel Tregoning (axeldeviaje) ; bayo (work on the image) [CC BY 2.0], via Wikimedia Commons