Firstly, you can compare many different versions of this classic 80s arcade game by watching the clips in the video playlist above. A "let's compare" video is also included within the playlist, should you rather just watch one video. The Commodore 16 and Plus/4 version has to be the worst of them all - a terrible conversion!

Sideways scrolling games were abundant in the 80s, and Ghosts 'n Goblins is one of the better ones. The game was originally released to the arcades by Capcom on September 19th 1985, and became a smash hit, before being ported to the 8 bit home computers such as the ZX Spectrum, Commodore 64 and Amstrad CPC in 1986. In 1990, the game was also released for the 16 bit computers including the Commodore Amiga, Atari ST and IBM PC compatibles. There were also versions for the Nintendo Gameboy and NES. 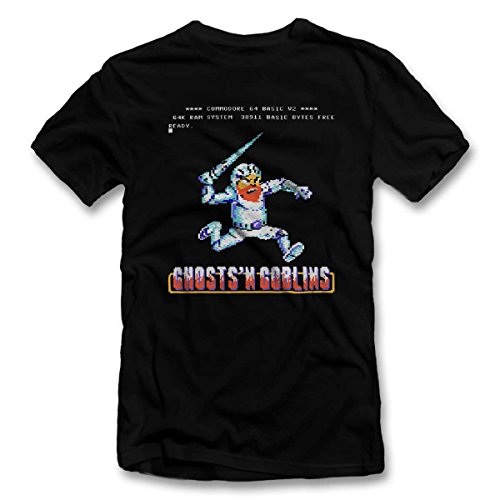 You play the role of an heroic knight who goes by the name of Sir Arthur, and your job is to defeat a range of nasty, evil monsters including ghosts, goblins, zombies, demons, ogres, bats, dragons and cyclopes, to name but a few. Your ultimate goal, though, is to rescue Princess Prin Prin who has been kidnapped by the evil king of Demon World, Satan.

Personally, I found the game very difficult to play, and if Sir Arthur is hit just twice then he loses a life - after the first hit Arthur loses his armour and must fight in his underwear! Frustratingly, you also go right back to the beginning of the level unless you have made it over halfway, in which case you will go back to the halfway point.

However, despite this, I found myself going back for more, and judging by the ratings in the computer magazines at the time, gamers couldn't get enough of the game.

As far as 80s computer games go, this is a true classic, and featured the addictive playability that is lacking in so many games today. 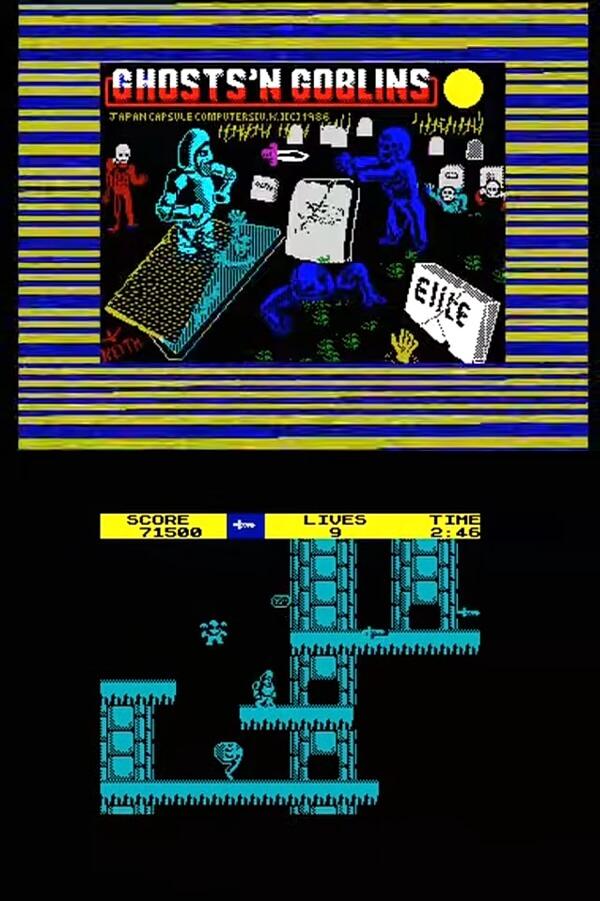 Although the ZX Spectrum version of Ghosts 'N Goblins didn't have the visuals and sound of the C64 version (the farting sound is pretty amusing!), the gameplay itself was still pretty decent, with pretty smooth scrolling. Many magazine reviews gave favourable reviews with scores generally in the 85-95% range. Sinclair User gave it 5 stars. Issue 59 of Computer & Video Games awarded 8, 7, 8, 9, for the graphics, sound, value and playability, respectively. Issue 30 of Crash Smash gave the game a Crash Smash award and stated that it was "another very competent Capcom conversion".

Well, at least the music is half decent, but this flickery version is without the smooth scrolling or sprites of the C64 version. I had a friend who owned a CPC and, in general, the scrolling on the CPC was never particularly good. I also notice from comments about the game on youtube that in this version Sir Arthur doesn't lose his armour, the collision detection is woeful, and above all else, it's too hard.

Leave your comments below with your thoughts on any version of the game.