Go West are a unique British pop duo that were formed in 1982 by lead vocalist/drummer Peter Cox and guitarist/vocalist Richard Drummie. They are best known for their top 20 hit singles "We Close Our Eyes", "Call Me" and "Don't Look Down" in the 1980s, and also the 90s hits "King of Wishful Thinking", "Faithful", "What You Won't Do For Love" and "The Track of My Tears". 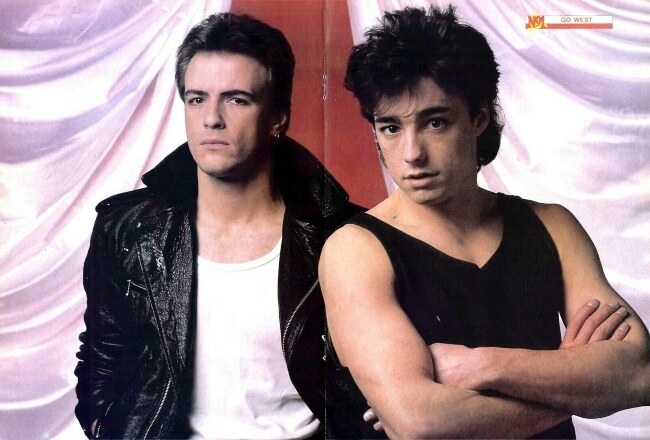 The band's music features an interesting blend of synthpop, dance-pop and white soul. Commercially speaking, they never quite reached the dizzy heights of synthpop duos such as Pet Shop Boys and Eurythmics. Nonetheless, their sound and fashion style (the latter often featuring a combination of black vest tops and leather jackets) is distinguished and instantly recognisable, and they certainly deserve recognition as one of the great 80s synthpop acts.

Cox and Drummie started out with little more than a guitar, keyboard and a TASCAM Portastudio. They asked their manager, John Glover, to find a producer to record "We Close Our Eyes" and "Call Me", so they could send out demo tapes to record companies. The songs caught the attention of Chrysalis records, resulting in a recording contract. 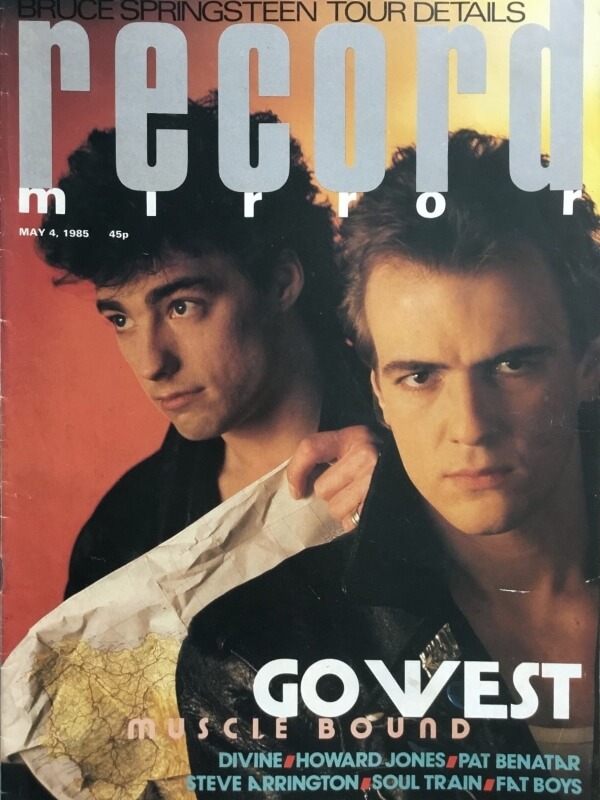 Peak chart positions shown are for the UK

We Close Our Eyes

The duo's debut single from 1985 is often described as the quintessential 80s tune. It is very typical of 80s synthpop, and managed to reach Number 5 in the UK. Surprisingly, this was their only hit to make the top 10.

The song received a lot of radio airplay in America and also reached No.5 on the US Dance Club Play Chart and No.41 on the Billboard Hot 100 in the U.S.

The imaginative and eye-catching video was directed by Godley & Creme and helped the band to be voted the "Best Newcomers" at the 1986 Brit Awards.

This was the band's second single and was slightly less successful than their debut, reaching No.12 in the UK.

Go West's self-titled debut album was released in 1985 and included the hit singles "We Close Our Eyes", "Call Me", "Goodbye Girl" and "Don't Look Down". The album itself reached No.8 in the UK album charts, which was pretty successful for the 80s. 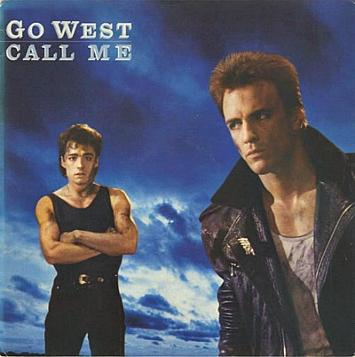 Bangs and Crashes, an album of remixes, b-sides and live tracks, was released in 1986. Included were the Total Overhang Club Mix of "We Close Our Eyes" and "Call Me" Indiscriminate Mix.
During the same year, the pop duo won a Brit award for the Best British Newcomer. 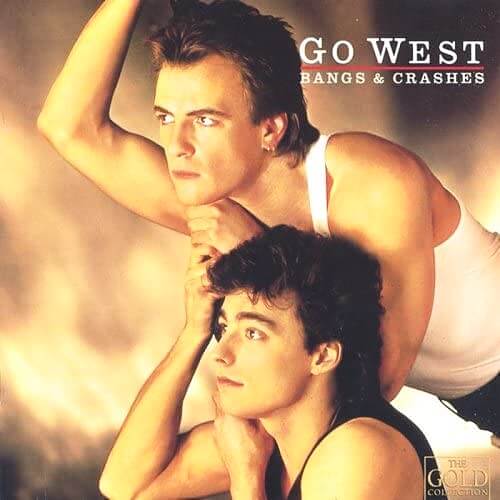 Admittedly, I'm not a massive fan of ballads, but Peter Cox gives a very notable vocal performance on this one, although it was the least commercially successful single from the duo's debut LP, sadly, reaching No.25 in the UK. The song can be heard in the Miami Vice episode "The Prodigal Son". 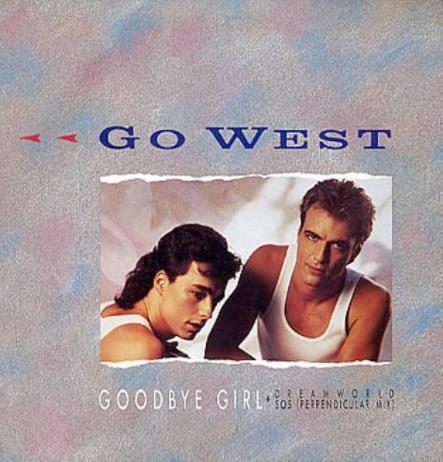 Don't Look Down was the last of the singles to be taken from the band's debut album. It managed to reach a respectable No.13 and was my personal favourite Go West song.

In 1986, the duo released a remix album entitled Bangs and Crashes, although it failed to chart. It featured remixes of singles, as well as new tracks including One Way Street which was released as a single. 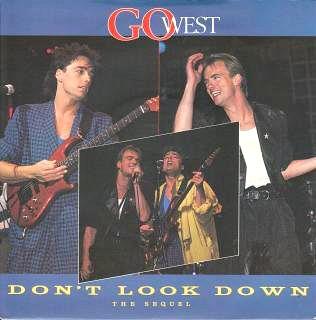 Dancing on the Couch - the Difficult second album

In 1987, Go West released their follow-up album, Dancing on the Couch, which made No.19 in the UK Album Charts. I truly wanted to refrain from using the cliched "difficult second album" line, but it certainly rings true here.
The singles "True Colours", "I Want To Hear It From You" and "The King is Dead" were released from the album, although they all failed to reach the UK Top 40.
The American release of the album included the remix "Don't Look Down - The Sequel", which was also released as a single, most likely as an attempt to boost the disappointing sales of the album. However, it only reached No.172 in the U.S. 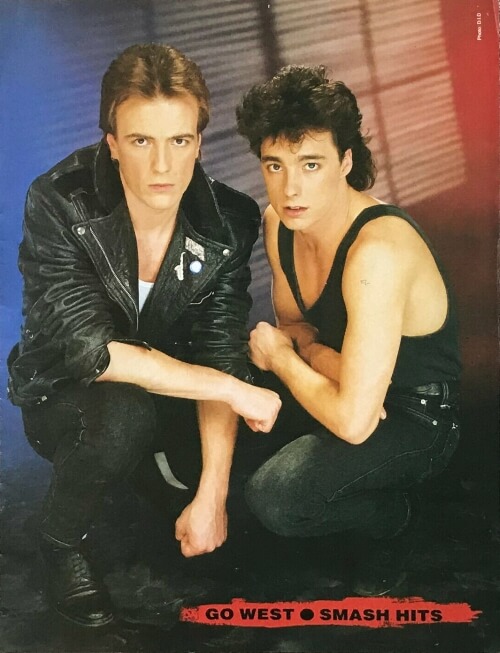 The lads released a successful comeback single in 1990 entitled King of Wishful Thinking, which later featured on the 1992 album Indian Summer, and was also on the soundtrack and opening credits to the Pretty Woman movie. Thanks to the movie's popularity, the song gained a cult following.

Richard Dummie moved to Los Angeles during the early 90s, but now currently resides in the UK. 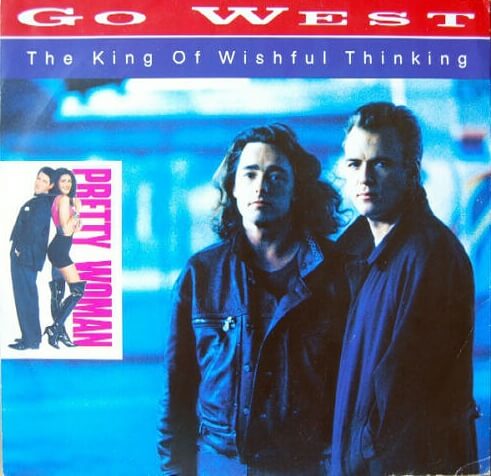 After this album, the band took a very long break and Peter Cox released a self-titled solo album in 1997, and several solo albums during the Noughties.

The band released a new album futurenow on 23 June 2008, but had now ditched Chrysalis records for the new label Blueprint.

In 2016, a new track by Go West entitled "Determination" was included on the compilation album Fly - Songs Inspired by the Film Eddie the Eagle. If you haven't listened to this album yet then I recommend going to Spotify and having a listen, because it features some fantastic tunes from 80s artists which were produced by Gary Barlow.

Both Cox and Drummie are now in their 60s, and Go West regularly play at the many retro festivals across the UK. Sadly, all shows in 2020 were cancelled due to Coronavirus. Live dates planned for 2021 have now been moved to 2022. These include Birmingham Symphony Hall, London Palladium, Southend Cliffs Pavilion and Manchester Bridgewater Hall.

By Andwhatsnext, aka Nancy J Price - http://andwhatsnext.com/bands (Own work) [CC BY-SA 3.0 or GFDL], via Wikimedia Commons
Embed from Getty Images 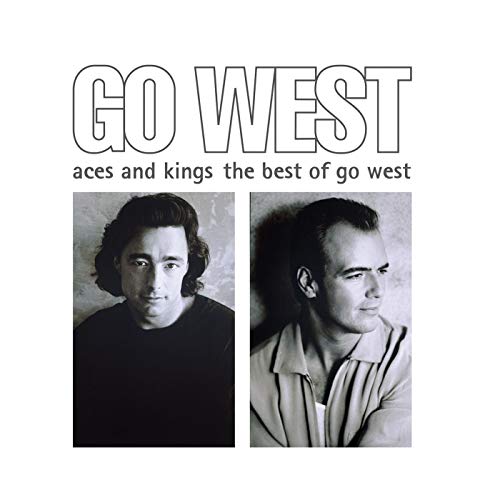 Aces and Kings - The Best Of Go WestBUY from AMAZON