GRANDMASTER FLASH AND MELLE MEL "WHITE LINES (DON'T DO IT)"

Released only on 12" vinyl by Sugar Hill Records, this classic old school rap tune never featured any input from Grandmaster Flash (Joseph Saddler), according to a revealing interview he did with Jermaine Hartsfield on June 11 2002. He also claims that his name was left on to mislead the public into thinking he played a part on the record, and Grandmaster Flash and the Furious Five had split and left Sugar Hill Records before the record was released.
At the time, DJ's were seen as more important than the MC rappers, which is, no doubt, why Melle Mel tried to use his name. "White Lines (Don't Do It)" was eventually credited to Grandmaster and Melle Mel (without the Flash) after an ugly court case, which is what was used on the UK vinyl sleeve (see below). 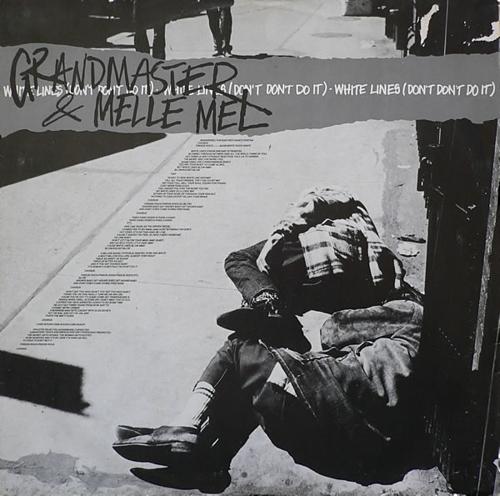 As you may have gathered by the song's title, the lyrics warn against cocaine use and drug smuggling. However, this wasn't always the case, and the original track was actually written to celebrate a cocaine lifestyle. "Don't Do It" was added to appeal to the mainstream for commercial success.
The bassline was sampled from the Sugar Hill House Band song "Cavern", which itself was a cover of the track by the American post-disco, dance-punk group Liquid Liquid.
The track was written by Melle Mel (Melvin Glover) band the founder of Sugar Hill Records, Sylvia Robinson, who passed away on Sept 29 2011 aged 76.
The B-side featured the track "Melle Mel's Groove".
The single is notable for spending an incredible amount of time in the UK Top 100. The song had already spent 4 weeks at the lower end of the chart when it re-entered at #93 on 8th Jan 1984. On it's 27th week in the chart, it finally broke into the Top 40, reaching #36 on 10th June. The single reached #10 on 1st July and crawled to a peak position of #7 for two weeks from 22nd July. Despite falling back to #10 on 5th August, the single refused to die and it climbed yet again to #9 on 12th Aug and was still at #10 the following week.
Incredibly, on 21st October, the single spent it's final week in the chart (after 46 weeks) at #55, before finally falling out of the Top 100. Indeed, the song outsold several No.1 hits and became the 13th best-selling single of 1984.

A section of the lyrics refer to racism against black people when arresting them for drug crimes, and highlights the fact that the white businessman John Delorean managed to get away with saving his car company from bankruptcy using drug money, despite being arrested for trying to purchase 24 kilos of cocaine during a sting operation by the FBI.
A street kid gets arrested, gonna do some time,He got out three years from now just to commit more crime.A businessman is caught with 24 kilos,He's out on bail and out of jail and that's the way it goes.
"White Lines (Don't Do It)" was covered by Duran Duran in 1995, and reached #17 in the UK singles chart. They recorded it with Grandmaster Flash and Melle Mel. However, the album of covers, Thank You, was savaged by many critics, and in 2006, it was named as the "Worst Album Ever" by the editors of Q magazine. 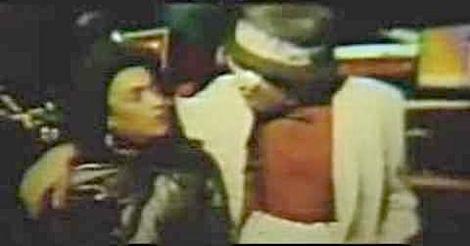 Lyrics for White Lines (Don't Do It)