There has been much debate over the years as to whether this song was, as Greg Lake claims, written as an anti-commercialism protest, or as lyricist Peter Sinfield claims, was written about the loss of childhood belief and innocence. Some have even claimed that the lyrics are attacking religion, although neither Lake or Sinfield have shared that view.

Whatever the actual truth is, the song is now regarded as a Christmas classic and has been played in December by mainstream radio stations every year since its release.

I Believe In Father Christmas was released as a solo single by Greg Lake in November 1975, peaking at #2 in the British singles chart. The track was later recorded by Emerson, Lake & Palmer for the 1977 album Works Volume II, although it had a more minimalist arrangement.

The instrumental melody in the song was borrowed from Troika by Russian composer Sergei Prokofiev, who created it for the Lieutenant Kijé suite in 1933 for the film of the same name.

80s songstress Toyah Wilcox recorded a version of the song for ITV's Pop Goes Christmas in 1982, and this was released as a downloadable single in 2012.

Greg Lake sadly passed away on 7th December 2016 after suffering with cancer. 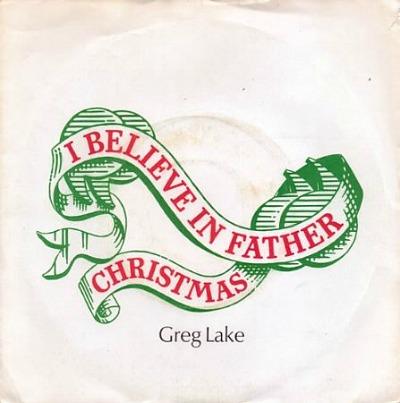 The unremarkable sleeve for the 7" vinyl single which has the lyrics printed on the reverse.

Read “I Believe In Father Christmas” by Greg Lake on Genius