Now, I know what you're thinking. Who on earth is Harper Starling and what is she doing on an 80s website?
I may be in my 50's, but I haven't lost it quite yet! I don't often feature new artists, but I am very pleased to make an exception for Harper Starling, and I hope you will agree after watching her video above, in which she indulges herself in the quirkiness of 80s fashion.
Anyone who you grew up listening to 80s pop music (which is the majority of visitors to this site) will remember when the songs dominating the charts featured memorable melodies that were guaranteed to get even the shyest of people onto the dance floor at the school disco. Maybe we've all turned into our parents, but it seems that pop songs today are just lacking a certain something - structure and a decent tune spring to mind. Indeed, I often find myself using the exact same immortal words that my Dad used to shout at me "keep the bloody racket down!" 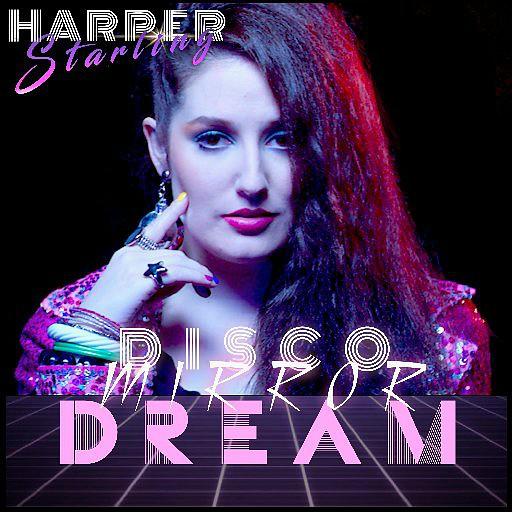 It was very refreshing to listen to Harper Starling's new single (the artwork fits this page very well!) which hark's back to the golden days of pop music production. It's very rare for me to not be irritated by a pop song these days. However, I thoroughly enjoyed listening to "Disco Mirror Dream", and it didn't irritate me in the slightest. It's an upbeat and enjoyable pop tune (some would say sugary, but that sounds like an insult) which features a very infectious chorus. If there has to be an irritation, then it is the fact that I can't get the damn tune out of my head - it has No.1 written all over it.
So what are the song's lyrics about?
According to Harper, they're about "celebrating each other's differences and letting loose on the dance floor because you can". Well, I couldn't agree more. Never be afraid to be yourself and if people can't accept who you are then they aren't worth knowing.
Directed by John Engstrom (he has worked with Cyndi Lauper and Britney Spears), the video has bucketloads of energy with a very retro feel. It lives up to its intriguing title, where we see Harper dreaming of the late 70s and early 80s disco era, trying on lots of retro clothing and accessories, including a tutu skirt, shutter shades, fingerless fishnet gloves and disco mirror ball earrings, to name but a few fashion items. I'm pretty sure I spotted a unicorn appear at one point, too - so very 80s! Harper has an extensive wardrobe to play around with, and even manages to slightly replicate Madonna's look from the 1985 movie Desperately Seeking Susan. She certainly appears to be having a whole lot of fun, as girls did in the 80s - Cyndi Lauper would be very proud!
Apparently, Harper has been described as "the love child of Lady Gaga, Cyndi Lauper and Meghan Trainor", and that's not an inaccurate description, although, she prefers to be called "star child from planet disco".
Whatever you wish to call her, I really like this lady. She has real energy that takes me right back to the early to mid 80s pop scene. Harper states that "my goal is to spread a bit more positivity throughout the world, and celebrate each other more. I believe we can all change the world in our own little ways, by lifting each other up and remembering that no matter when the world brings you down, you can always get up and dance".
Well, that's a very positive message, and I look forward to hearing new material from Harper Starling. She is certainly one to watch, and her video has already racked-up around 50,000 views. She deserves each and every one of them and I wish her every success.
Also visit Harper on Facebook and her website harperstarling.com
Disco Mirror Dream on iTunes