Further down the page you will find the original 1989 video for "Atomic City". The video above features Holly Johnson being interviewed and performing the song on German TV.

With its intro sampled from T-Rex, "Atomic City" was an energetic dance track with a big production, funky bassline and anti-nuclear lyrics. Personally, I thought it was the best track on the best-selling Blast album, but I always like an extravagant 80s production.

This was the third solo single release by Holly Johnson after leaving Frankie Goes To Hollywood, and reached #18 in the UK singles chart. 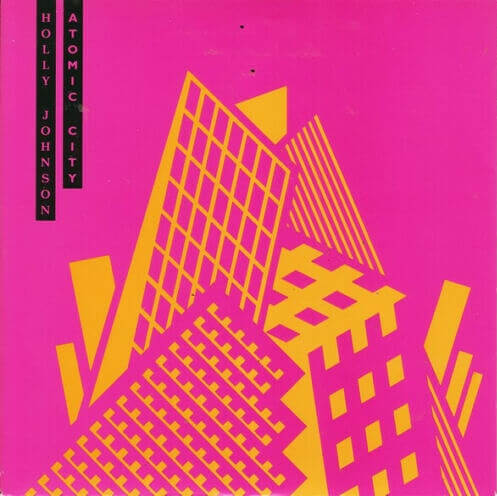 The song was a bit more Frankie-sounding than the previous two middle-of-the-road pop singles "Love Train" and "Americanos", which both reached #4. However, it wasn't produced by Trevor Horn, of course, as Holly had well and truly fallen out with him after winning the court battle against ZTT records - this freed him from their contract which was unfairly stopping him from pursuing a solo career.

"Atomic City" was actually produced by music producer Dan Hartman, who had numerous dance and disco hits inc. Instant Replay and Relight My Fire - you may remember Take That and Lulu doing a cover together of the latter tune.

The environmentally friendly song featured synth horns a plenty, and with the extra female backing shrieks, this gave it a dramatic vibe. The lack of a melody would have been disappointing for new fans who had bought the previous two singles, but would have pleased Frankie fans, in that it was slightly less mainstream, with doom-laden lyrics about radiation and air pollution.

The big production led to Smash Hits magazine describing the single as "overblown", which was harsh.

The B-side featured a self-penned track "Beat The System", which partly features on the A-side. The song sounds somewhat like an electro remix of Michael Jackson's "Billie Jean", but with Holly's vocal, of course.

In the video, Johnson wears a colourful suit with geometric patterning, and he carries a cane. He uses it to guide a group of people across a fake summery landscape filled with pretty flowers and green fields. He leads them into a dark and grim, apocalyptic underworld, which, no doubt, depicted a world devastated by fallout.

As expected, Holly gave an enthusiastic performance on Top Of The Pops. He was introduced by Anthea Turner, and he wore a 60s sci-fi style silver radiation suit. There were radiation symbols on the drum kit and microphone. The keytar player and drummer also wore shiny radiation suits and masks, and the female guitarist wore a silver dress and a beehive wig. 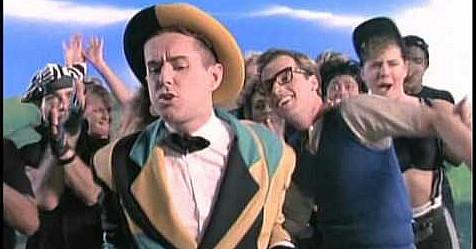