It's been fifteen years since the Ex-Frankie Goes To Hollywood frontman has released any new material, and this new album has been released exactly thirty years after Frankie released their debut album Welcome To The Pleasuredome. So, is Europa worth the wait?

The album is described as being a "retrospective collection of joyful and optimistic songs" and also "a euphoric, often-electronic-led return, celebrating love, dance... and chronicling exactly what Holly Johnson has been up to these last fifteen years". The front sleeve artwork is provided by Johnson himself and is entitled United Kingdom After the Rain.

The opening track and lead single, Follow Your Heart, is a retro 90s style dance number with optimistic lyrics and a chorus that sticks around in the head. The minimalist production is in stark contrast to those overblown tracks created by Trevor Horn back in 1984, but it allows Johnson's strong vocal performance to shine through. I like it, and there's a fine remix by the legendary Frankie Knuckles on the single release - I remember he also remixed Love Train for the Hollelujah remix album - but for fans expecting something a bit more "Frankie" you may be disappointed.

In And Out Of Love is a pretty lightweight pop tune which was released as the second single. It features an incredibly infectious melody and Johnson's voice, once again, sounds better than ever. In fact, he sounds very comfortable singing this chirpy, easy listening number, and I challenge anyone not to go away singing this one to themselves for the rest of the day, proving that HJ is incredibly good at penning catchy pop tunes.

Next up is Heaven's Eyes, in which the production reminds me of an 80s Eurovision entry (although not in a bad way) with added synth choirs and punk-inspired, Sigue Sigue Sputnik style guitar riffs. The chorus is incredibly infectious and this is a pretty decent, old school pop song, the likes of which they just don't make any more.

So Much It Hurts is the first ballad on the album and what a corker it is. Johnson gives one of the strongest vocal performances of his career which leaves even The Power Of Love in the shade. This track oozes class, although it's a shame that the drum track is rather weak. That blissful lounge piano and sparkling vocals save the day, though.

Dancing With No Fear is a retro style house track which sounds like the kind of stuff I used to dance to in the clubs many moons ago. Okay, so its unoriginal, but certainly retro, and a strong melody and a very fine vocal performance (the best on the album) make it worthy of being released as a single. Definitely one of my favourite tracks. Update: this was released as the fourth single in June 2015.

The title track is a superbly theatrical number that features synth legend Vangelis, and it started life in an underground studio in Paris (which was designed for Hitler) way back in 1990. It sounds like the theme tune to an epic 80s movie and is well-suited to Johnson's vocal style, and he really belts this one out with real gusto. The song was completed in May 2014 with the help of co-producer Mark Ralph. It's certainly the darkest track on an album of mostly joyous melodies, and Frankie fans will love the big sound.

Glorious is a mid-tempo, electro pop affair with uplifting lyrics and vintage, Jarresque synth arpeggios. This is one of the better tracks on the album and steers away from the 90s europop production used on some of the other tracks on Europa. Interestingly, Vini Reilly from the post-punk band The Durutti Column provides guitar.

Eighth track, Hold On Tight, has a slightly cheesy Eurovision style production and is possibly the weakest track on the album. That said, Johnson sings it with conviction, but with his voice on such fine form he deserves a better backing track than this.

Another very strong vocal performance features on Lonesome Town, a powerful song that is let down by a contrived production. It has the feel of the title track, but without the magic of Vangelis to give it more drama. It's still an enjoyable listen, though with another strong melody.

You're In My Dreams Tonight was inspired by one of Johnson's friends who died of an AIDS-related disease in 1991. It gets off to a very promising start, and I was almost hoping this would be an instrumental number with its goosebump-inducing analogue synth bass and effects. Although Vangelis played no part in producing this track, it certainly feels like it's been inspired by him and the electronic-led production works brilliantly here, even though he's craftily borrowed the synth choir riff from the 12 inch mix of his 1991 single Where Has Love Gone?".

The final track, The Sun Will Shine Again, is a memorable and uplifting ballad which is slightly let down by a weak drum track with uninspiring hand claps. However, the rest of the production is excellent and has an early 80s synthpop band feel. Once again, I found myself singing this pleasing tune to myself throughout the day, as with the majority of the songs on the album. A very decent ending to a very enjoyable collection of tunes.

The deluxe edition of Europa also includes an original mix of the title track and piano version of the brilliant So Much It Hurts.

With Holly Johnson's voice sounding so sensational at the moment, it's a real shame that the tinpot production techniques (particularly the drum tracks) let him down on a couple of the tracks. This is a voice that deserves a real showcase, not half-baked europop.

Having said that, the finer moments outweigh the poorer ones and, overall, this is a fine, old school style collection of memorable, uplifting tracks with melodies that stick around in the head. Although there is one ballad too many for my liking, the album is a big improvement on his previous two solo albums Dreams That Money Can't Buy and Soulstream which, I feel, lacked melody on some tracks. It's not without imperfections, but it's definitely his best work since Blast, which you may remember hit the top of the UK album charts back in 1989.

If you're expecting extravagant Hornesque productions or originality then you'll be disappointed.  And, I guess, the guy is too old (at 56 years of age) to be cavorting around in tight leather bondage gear singing songs about sex and horror.

However, what you can hear is the joy and passion in Johnson's unique and much-improved voice. The album is released on his own Pleasuredome label and you can tell that he is freely expressing himself, creating the music styles he enjoys the most and being deeply comfortable in his own skin. And you're left in no doubt that Johnson is very talented at crafting irresistible, no-nonsense and honest, old school pop tunes.

Europa is a statement that this is, after all, Holly Johnson and not Frankie Goes To Hollywood - get over it! 8/10

Update: Club Europa featuring remixes of the singles from the album was released on 13th Nov 2015. 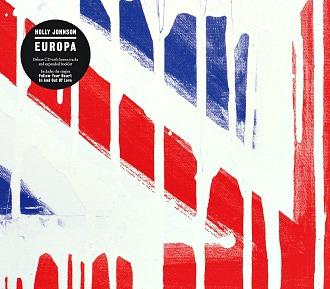