After the success of his first solo single (after the break-up of Frankie Goes To Hollywood in 1987), Holly Johnson was hoping for a second major chart hit with his follow-up single "Americanos", and he was not to be disappointed. The second single from his Blast album entered the UK singles chart at No.28 on 26th March 1989, and had broken into the top 10 by 9th April. The song peaked at No.4 the following week, and remained their for two weeks, spending a total of 11 weeks inside the Top 100.
Spookily, the Liverpudlian singer's previous single "Love Train" also reached the exactly same chart position and spent the same number of weeks in the Top 100.
Penned by Johnson himself, the jaunty slice of 80s synthpop took a sarcastic swipe at consumerism and the American dream. I particularly like the line "everything's organised, from crime to leisure time". The latin vibes with synth brass and an infectious melody allowed people to joyously dance to his sarcasm in the clubs, and also guaranteed plenty of airplay on the major radio stations.
Johnson proved that you could still have something controversial to say without being banned or relying on an overblown production, instead, using a teatime chorus that would appeal to a whole new pop audience. 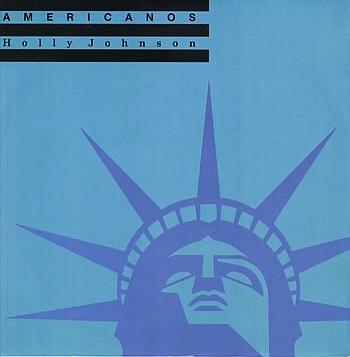 Interestingly, he took another swipe at consumerism in the fourth track on his Blast album, "Deep in Love", this time combining it with a tropical melody, and this would have made a fine third single. Instead, Johnson opted for the anti-nuclear "Atomic City", which lacked a decent enough tune to take it into the top 10.
The B-side to "Americanos" featured the Mambo Dub Mix (4:11). This was also included on the 12" and CD singles, along with the Liberty Mix (5:32). A 12" Magimix single was also released featuring the Magimix (6:38) and Magimix Dub (4:09). The CD single came with two protection sleeves.
"Americanos" also became a top ten hit across Europe, reaching No.1 in Austria, No.2 in France and Germany, No.4 in Switzerland, No.5 in Belgium, No.6 in Ireland and Norway, No.8 in the Dutch Singles Chart, and No.10 in Italy. The song also reached No.10 in New Zealand.
In the video, Johnson plays the role of a lottery show host and is dressed in a gold suit. He also wore the suit for a performance on Top Of The Pops.