As brilliant as the song was, after three months of Frankie's "Two Tribes" being played every other hour on the radio, and with the threat of Nuclear Armageddon looming over us, we were all in need of something a little more optimistic, with a positive message of uniting the world.
With it's tropically-inspired theme, positive lyrics and infectious chorus, "Like To Get To Know You Well" by synth-pop maestro Howard Jones, was a very welcome, upbeat addition to the Top 5, with Stevie Wonder's "I Just Called To Say I Love You" rather too syrupy for my liking. 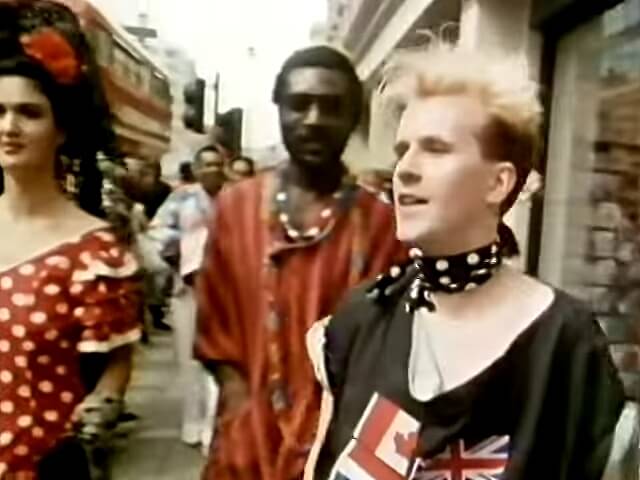 Jones greeting people and wearing a polka dot neckerchief and black clothing with world flags printed on the front.

The song was included on Howard Jones' remix album "The 12" Album", which reached No.15 in the UK album charts. It was also included on the U.S. version of his second album Dream Into Action, but was not included on the original UK versions. However, it was inlcluded as the first track on the second re-issue of the album in the UK. The track also featured in the John Cusack film Better Off Dead and on the radio station Wave 103 in the video game Grand Theft Auto: Vice City Stories.
The B-side on the 7" vinyl featured the track "Bounce Right Back". The A-side of the 12" vinyl featured the International Remix (7:42) of "Like To Get To Know You Well", which was also on The 12" Album. The B-side include the Cause + Effect Mix (7:29) of "Bounce Right Back".

Two separate videos were made for the UK and U.S. audiences. The British version featured Jones walking around the streets of london greeting people, with his bandmates and other musicians, including steel drum players and dancers, following him around. He is wearing a black and white polka dot neckerchief and a shirt displaying flags from around the globe.
Sadly, the UK version on Youtube is very poor quality, so apologies for that. However, you can watch the U.S. version further down the page, wlthough it's not half as interesting - it features Howard and his band mates in a studio wearing various outfits from across the world, blended with colourful animations.

Previous single: "Pearl in the Shell". Next single: "Things Can Only Get Better".
Jones' fifth single entered the UK singles chart at No.33 on Aug 5 1984, reaching No.4 on 19th Aug, where it remained for three weeks before falling back to No.5 on 9th Sept. It was the musician's fourth top ten hit.

The front and rear sleeve of the UK 7" vinyl

Lyrics for Like To Get To Know You Well

Like To Get To Know You Well at Wikipedia