HOWARD JONES "PEARL IN THE SHELL"

The fourth and final single from Howard Jones' debut album Human's Lib, "Pearl in the Shell", has always been my favourite track by the musician, and it gave him his third UK top 10 hit.
However, I was disappointed that there was no extended version released - the 12 inch vinyl, instead, including an extended version of "Conditioning" (track 1 on Human's Lib) entitled "Total Conditioning". The standard version of "Pearl in the Shell" and a new track "Law of the Jungle" featured as track 1 and 2 on both the 7" and 12" vinyl releases. 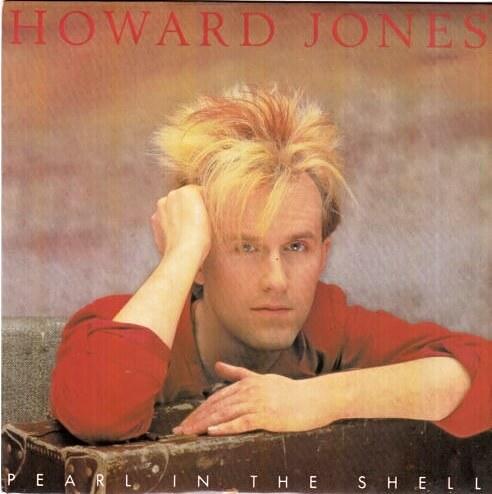 An extended mix (6:44) was later included on 6-track The 12" Album, which was released in the autumn of 1984, reaching No.15 in the UK album chart.
The song was produced by Rupert Hine, who produced most of Human's Lib, and it features a sax solo by Davey Payne from The Blockheads.
The single entered the UK singles chart at No.25 on May 20th 1984, making it the third highest new entry that week. By 3rd June, it had reached No.8, and then peaked at No.7 for one week on 10th June (in the same week that Frankie Goes To Hollywood" entered the chart at No.1 with their cold war classic "Two Tribes"), before falling back to No.10.
The video starts with Howard on stage with a group of trombone players, banging a snare drum - I always liked the simplicitiy of the intro to the song. A small audience (of fans?) can be seen dancing in time to the music. Jed Hoile features heavily in the video, and he was the mime artist in the video for "New Song", who also regularly performed with Jones on stage.
The previous single "Hide and Seek" had failed to reach the UK top 10, stalling at No.12, and I always felt that it was maybe a little too dark for a pop audience who had grown used to Jones' melodic synthpop tunes, although it's a fabulous song, nonetheless.

Lyrics for Pearl in the Shell