Firstly, I have included the official video above, although it really is pretty unwatchable! Therefore, I have also included another video below featuring a performance on BBC Top Of The Pops and they are introduced by David "Kid" Jensen.
Imagination were a trio who were particularly successful between 1981 and 1983, achieving success with three Top 5 hits "Body Talk" (which is a personal favourite), "Just An Illusion" and "Music and Lights". The latter was the band's fifth hit single, reaching #5 in the UK on 27th June 1982 - this was a substantial jump from #31 the previous week - where it remained for two weeks.

The B-side included an instrumental version on both the 7" and 12" vinyl singles, although the 12" was 55 seconds longer - hardly worth forking out for!
The single was also a chart topper in Italy and France and was released as the second single from the group's second and most successful studio album "In The Heat Of The Night". The album was composed by band members Leee John (the lead singer) and Ashley Ingram, and the songwriting duo Jolley & Swain, who first met of The Muppet Show in 1975 while Swain was a cameraman. The duo produced numerous hits during the 1980s, including "True" by Spandau Ballet and "Love Resurrection" by Alison Moyet.
This was the trio's last single to reach the top ten in the UK, although they continued to release new material and tour throughout the 80s and into the early 90s. The band split in 1992.
The hip hop group JVG (from Finland) sampled "Music and Lights" on their track "Tottoroo". 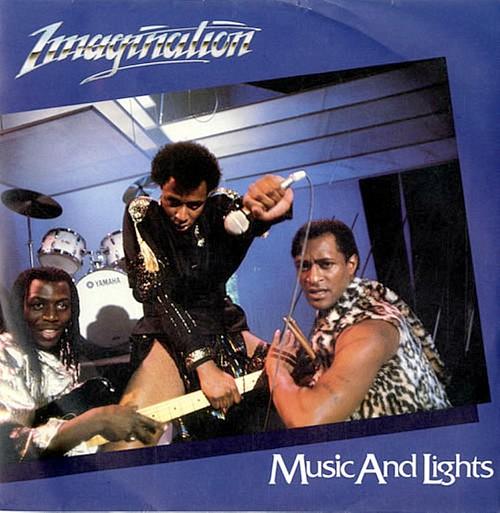 Prepare yourself for some dazzling 80s post disco fashion in this video. That is one mighty jacket being worn by Leee John! It is also interesting to note the clothing being worn by the audience members including a 50s inspired polka dot dress.

This is an interesting, up-tempo remix we found on Soundcloud.