JANET JACKSON "WHAT HAVE YOU DONE FOR ME LATELY?"

This is one of Janet Jackson's more memorable 80s tunes, mainly because the melodic chorus reflects the title of the song so strongly. The lyrics are about a bad relationship with a man who doesn't do anything for her - pretty obvious, really!

The track was the lead single from Janet's third studio album Control, and reached #4 in the U.S. and #3 in the UK. Not wanting to be outdone by her brother, Michael Jackson, Janet also released nearly every track on the album as a single. These were; "Nasty", "When I Think Of You", "Control", "Let's Wait Awhile", "The Pleasure Principle" and "Funny How Time Flies (When You're Having Fun)" - the last rack wasn't released in America. 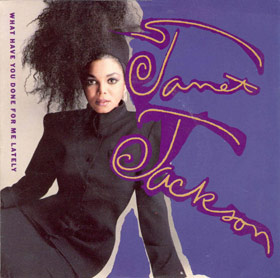 Reviews of the song were very favourable, with many critics liking the fact that Jackson was portraying the image of a strong, independent woman. More importantly, the record-buying public also liked it, and this became Janet Jackson's first Top 40 single in many countries.
The song was penned by Janet Jackson, Jimmy Jam and Terry Lewis, and the lyrics were originally written for Jam and Lewis themselves, but were reworked to reflect Jackson's divorce from James DeBarge in early 1985.
The music video was directed by Piers Ashworth and Brian Jones, with the choreography by Paula Abdul. It open with Jackson sat in a cafe/diner discussing how she has been stood up by her boyfriend with Abdul. The acting and the rolling of necks is cringeworthy, but thankfully this is quickly replaced by a decent enough dance routine.
Embed from Getty Images