First of all, I'll discuss the video playlist. The first clip features some interesting narration on the Jupiter Ace, by the English retro computer collector Steve Benway which is well worth a listen. The other three clips feature the games Moon Buggy, Jumpman and Snake, of which, the first is certainly the most impressive - see what you think!

It was, of course, the Sinclair ZX Spectrum computer that hogged the limelight as the most popular British home computer back in the 1980s, and Sinclair's ZX80 is remembered as the first home computer to be sold in Britain for under £100. 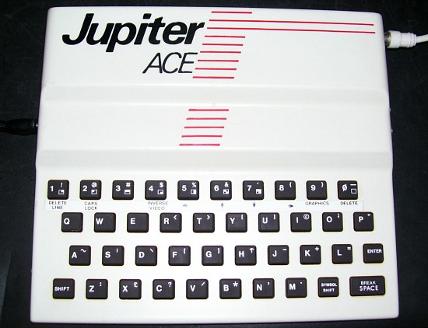 However, there was another very similar machine to the ZX Spectrum available that also used a Z80 CPU, but rarely got a mention.In 1982, two ex-Sinclair Research workers, Steven Vickers and Richard Altwasser, set up a company called Jupiter Cantab. They produced a machine which was a very similar version of the Spectrum with the same Z80 processor and rubber keyboard.However, despite it's low £90 price the Jupiter Ace sold in low numbers, and the dated monochrome video output and the inclusion of the Forth programming language (instead of the more popular BASIC) were to be its downfall.
The problem with the public is that, in general, they like to buy what everyone else is buying, regardless of whether a product is superior. Forth was a more powerful and flexible programming language than BASIC, and could run 10 times faster and used half the memory. Despite this, it was more difficult to learn and unfamiliar, and there was a lack of software available because other home computers of the time were using built-in BASIC. The infamous videotape format battle (Betamax vs VHS) battle produced the same results. Betamax produced superior recording results, but the public went for VHS, in this case because the recorders were cheaper to purchase and the cassettes had longer and, therefore, more convenient recording times - put simply, you didn't have to change the cassette half way through a film!Jupiter Cantab had never intended to market their computer to the same market as the ZX Spectrum and deliberately focused on building the machine for programmers. It was the fastest machine on the market, but with very basic graphics. Indeed, Jupiter advertised the Ace as "probably the fastest microcomputer in the universe!"

Nonetheless, with other machines now featuring colour graphics it was never going to truly succeed and the market was shifting very quickly towards playing games in colour with improved sound effects. Had the Ace been launched a couple of years earlier then it might have been a different story, although Vickers and Altwasser were still working for Sinclair back then, of course.Just 8,800 Jupiter Ace models were sold in total in the UK and U.S. (it was sold as the ACE 4000 in the U.S.), and Jupiter Cantab went bankrupt in November 1983. Because the Ace is a very rare computer you will now find models selling for close to £900 on eBay and similar auction sites.
Jupiter Ace Spec

Like many home computers of the time, the Ace didn't come with a monitor and had to be connected to a UHF TV (tuned to channel 36) via the aerial socket for its display. 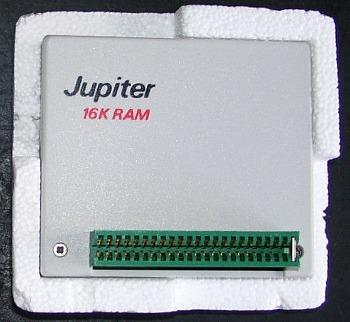