Released in January 1983, "Too Shy" reached #1 in the UK singles chart for two weeks. The song is the band's most played song and is often included on many 80s compilation albums.

The single entered the UK singles chart at No.33 on Jan 16th, making it the fifth highest new entry, reaching No.1 on 13th Feb. It spent a total of 13 weeks in the chart.

"Too Shy" was also #1 for five weeks in Germany and reached #5 in the US Billboard Hot 100. The song featured on the band's debut album White Feathers and was played heavily on MTV, which helped the band to experience major success with the single in the United States. However, Kajagoogoo failed to achieve further major success with their follow-up singles in the U.S., and are, therefore, considered to be "one hit wonders" here. 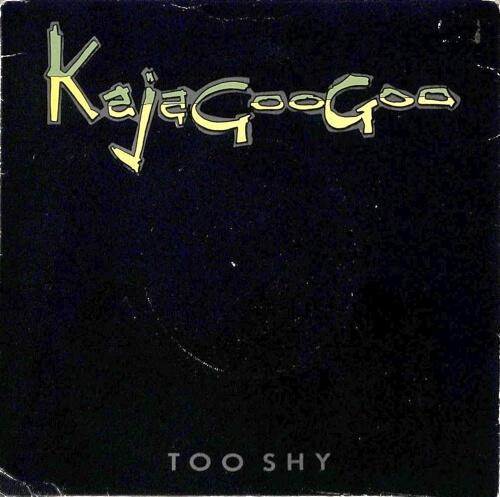 The single also reached #2 in New Zealand and Switzerland, #4 in Austria and Sweden, and #5 in Holland.

Kajagoogoo started out as Art Nouveau in 1979 without lead singer Limahl, who's real name is actually Christopher Hamill - Limahl is an anagram of his surname.

Now, I'm sure that you'll agree that the bassline by Nick Beggs is pure quality. Indeed, virtually all of their singles featured some fantastic basslines.

Although "Too Shy" was penned by the band themselves, the production was left to Colin Thurston (who produced Duran Duran's early albums) and Duran Duran's keyboard player Nick Rhodes.
The B-side 7 inch and 12 inch singles featured an instrumental version of the A-side, with the 12 inch also including the track "Take Another View".
The video features model Carolyn Espley as a waitress. She sees the band performing on a club stage behind a "Welcome Home Boys" banner, with soldiers from WWII dancing with their wives. The scene later changes to people dressed in 1960s clothing, and then in the present day (in 1982) and dressed in 80s disco clothing.
Although I remember Kajagoogoo performing the song on BBC Top Of The Pops, I don't actually remember ever seeing the video, so I am now watching it for the first time some 35 years later! 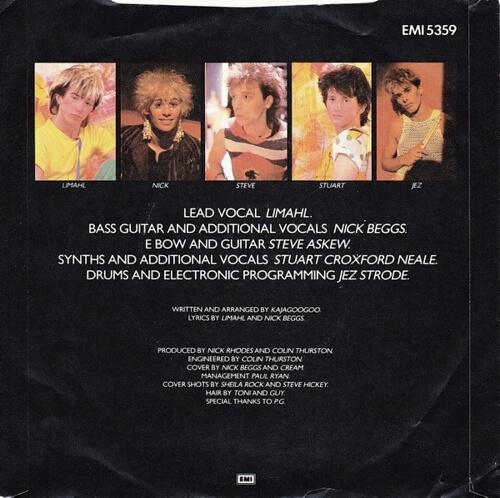 For those of you into house music then you should enjoy this SirAiva remix from Soundcloud.

Former Kajagoogoo singer on renewed popularity of Too Shy

Ooh To Be Ah