"Cloudbusting" was the second single from Kate Bush's fifth studio album Hounds of Love, and was written and produced by Kate herself. The song (and video) were inspired by the memoir A Book Of Dreams by Peter Reich, the son of psychoanalyst and philosopher Wilhelm Reich, who was the inventor of the Cloudbuster "rain-making" machine, which used orgone energy.
Wilhelm Reich was the author of a number of influential books, including "The mass pyschology of facism", which was released in 1933, the same year that Hitler came to power - the book was publically burned by the Nazis.
Kate's debut hit "Wuthering Heights" was also based on a book, of course, which was the Emily Bronte classic of the same name.
"Cloudbusting" was certainly one of the more interesting releases to enter the charts in 1985, covering a fascinating subject matter, and sounding worlds apart from the almost endless array of 80s synthpop tunes, hair metal and power ballads dominating the charts at the time. The production feels timeless, in fact, and the song would sit just as happily in a chart from any other decade .
Kate uses a Fairlight CMI digital synth/sampler on the song to produce the steam engine sound, which can be heard throughout much of the track. Extra backing vocals are provided by her older brother Patrick (better known as Paddy), who is a musician, producer and music critic, and he also makes his own instruments. Del Palmer also provides backing vocals, and Kate was in a relationship with him at the time. He also mixed the European B-sides "Burning Bridge" and "My Lagan Love".
The gorgeous cello strings on the song were arranged by David Lawson and performed by The Medici String Sextet.
The tribal style drum rhythm was played by session drummer Charlie Morgan and Stuart Elliot from Steve Harley and Cockney Rebel.
Following the success of the re-release of "Running Up That Hill" in 2022 (thanks to Stranger Things), "Cloudbusting" reached No.56 on the UK Singles Download Chart.

So, who is the man in the Cloudbusting video? It's the Canadian actor Donald Sutherland, who plays the inventor William Reich. His son, Peter, is played by Kate Bush herself. In the video, we see Reich and his young son pointing the cloudbuster machine at the clouds trying to make it rain, but ultimately, the video is about father-son devotion.
Sutherland just happened to be staying in a hotel nearby, and Kate went to his room to ask him to participate in the video. Unable to obtain a work visa in time, he provided his acting time for free.
The machine built especially for the video was only very loosely based on the real machine, and is much larger. It was, in fact, built by the very same people who created the creepy alien in the original 1979 movie Alien. There is also no evidence that the machine could actually produce any rain. However, in the video, after his father has been arrested, Peter manages to make the machine work, which brings some joy to the face of his father, as he is driven away in the rain by the authorities.
The video was directed by Julian Doyle and conceived by Terry Gilliam and Kate Bush. It was filmed at the Vale of the White Horse in Oxfordshire, England, and the machine was placed on Dragon Hill, just below the famous Uffington White Horse prehistoric carving.

Obviously, Kate Bush draws some influences from the weather here (more particularly the summer), but the lyrics for Cloudbusting are certainly about something much deeper - the close relationship of a father and young son as seen through the child's eyes. They tell of his struggle with realising that his Dad is fallible. "On top of the world, looking over the edge, you could see them coming. You looked too small, in their big black car, to be a threat to the men in power" describes when Reich was arrested, imprisoned and perceived as being a threat, leaving Peter feeling helpless and alone.

"Cloudbusting" entered the UK singles chart at No.26 on 20th October 1985 (Whilst Jennifer Rush was at No.1 with her 80s power ballad "The Power of Love"), reaching a peak position of No.20 the following week, where it remained for two weeks before falling back to No.27. The single spent a total of eight weeks inside the UK Top 100 singles chart.
The song achieved its highest chart position on the Dutch Top 40, reaching No.11. It also reached No.13 on the Irish Singles Chart and No.18 in the Belgian Top 30.

Feedback from the majority of music critics of 1985 was mostly very positive.
Writing as a guest reviewer in Smash Hits magazine for the issue 23rd Oct to 5th Nov 1985, Pop star Paul King stated "Kate reminds me of those astral acquaintances I used to meet as a teenager on camping holidays - unusual, unpredictable but with a charm that always attracted me. Listen out for the stirring string section, an electric groove of Navajo Red Indian drums and some British Pomp rock. I'm a fan."
However, NME's David Quantick was less impressed, remarking "A fine vocal... married to a rotten boring tune and some orchestral wittering."

90s ravers amongst you will know that in 1992, the electronic music duo Utah Saints sampled part of "Cloudbusting", using the line "I just know that something good is going to happen" in their biggest hit song "Something Good", which reached No.4 in the UK singles chart.
The Staves released a cover on their five track EP, for their Be Kind series of stripped down, alternative versions of songs from their 2021 album, Good Woman.
Metal band Sergeant Thunderhoof released an awesome cover of Cloudbusting on 12" coloured vinyl, which premiered on Nov 19th 2020 on Youtube. It also featured an animated version of Kate's video.
In 2021, the Scottish Indie rock musician Katie Malco released a cover version of the song.

"Burning Bridge" is, quite possibly, the best B-side I've ever heard! 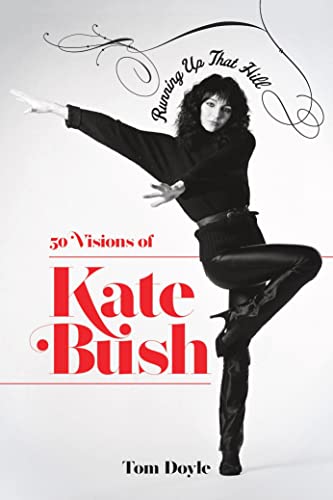 Running Up That Hill: 50 Visions of Kate Bush by Tom DoyleBUY from AMAZON