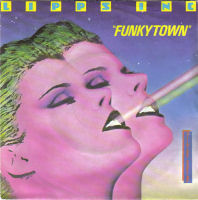 This electro-disco classic was the second single to be released from the band's 1979 debut album Mouth to Mouth. This was the only major chart hit for the studio band, reaching No.2 in the UK and No.1 on the Billboard Hot 100 in the U.S for four weeks.

The song was a No.1 hit in 28 countries across the globe, which was a record held until 2005 when Madonna's "Hung Up" reached No.1 in 41 countries. However, further single releases by Lipps Inc. failed to chart, although Rock It did manage No.64 on the Billboard Hot 100. However, Lipps Inc. had a few dance chart hits during the 80s, with How Long? hitting No.4 on the U.S. dance chart.

The man behind Lipps Inc. was Steven Greenberg from Minneapolis in the U.S. He wrote and produced all of the group's songs and played many instruments. The lead singer was Cynthia Johnson (she also played Saxophone) and the rest of the band were session musicians.

The original promo video (above) features the Musikladen Go-Go dancers and Debbie Jenner miming the lyrics. There is lots of pink and blue with early 80s style video effects and reflections on a disco mirror ball.
A soft rock version of "Funky Town" was released in 1986 by the Australian band Pseudo Echo which also became a hit.
Chart Performance
The single entered the UK singles chart at #70 on 11th May 1980 and quickly climbed to #25 the following week. By 1st June it had reached #3 (while Theme from M*A*S*H by Johnny Mandel was at No.1) where it remained for three weeks. On 22nd June, the single climbed to #2 where it remained for two more weeks, being held off the top spot by Don McLean with "Crying".