A New Cartoon With a Distinctly 80s Theme

Now this is exciting news! The Emmy-Award winning Simpson animator, Chance Raspberry, is making the World's first cartoon about neurodiversity. The idea behind Little Billy stems from Chance's own experience of growing up in the 1980s with Tourette Syndrome.
It all began way back in 1999, while Chance was still an animation student. After almost two decades in the making, the educational animated series aims to help end the stigma associated with having special needs, and has been influenced by the traditional, 2D hand-drawn animations that we all grew-up with during the 1980s.
According to Chance, "Whenever I watched cartoons, I was drawing, and whenever I was drawing, I wasn't ticcing". I can actually really relate to what Chance is saying here, as I suffer with an anxiety disorder myself. Indeed, it's one of the reasons I started a nostalgia website, and whenever I absorb myself in writing articles (like this one!) it reduces my anxiety significantly.
Having watched the official series trailer above, I must say that I am very excited about this project. The look and feel of the cartoon is authentically 80s, from the logo and graphics, to the cool electronic theme music. Those wonderful characters with their voluminous quiffs looks fantastic, too. But it is, of course, the puff-cheeked lead character, Billy, who is the cartoon's main focus - the mascot of neurodiversity. Being someone who is about as artistic as an inebriated elephant, I have a deep appreciation for cartoonists, and Chance is up their with the very best.
However, none of us will be able to show our appreciation unless the project actually gets off the ground, and this can only happen with enough funding. Chance is currently crowdfunding to get the project up and running, so if you want to help then visit his page at Indiegogo. Here you can not only donate, but you can also purchase a wide range of unique products, including a one hour animation lesson with Chance himself! He also designed his own GPK and Count Cheekula T-shirts and print sets, and they look pretty awesome, I must say.
The campaign hopes to raise a minimum $10,000 for the production and distribution of Little Billy's Merchline series 1, with 10% of all profits going to the Tourette Association of America. However, up to 15% of profits will be donated if more funds are raised. You can also read a lot more about the project at Kickstarter and also on Patreon. 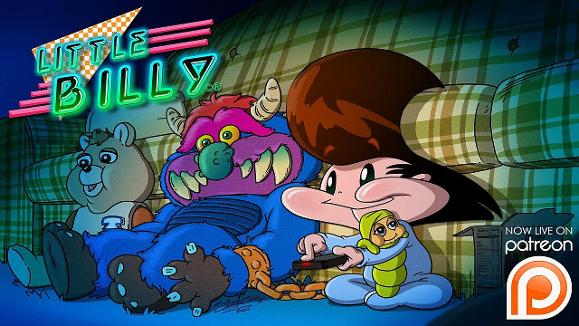