Every Christmas there is at least one product that becomes the "must have" toy, and in 1976 it was Little Professor. In fact, so much so that Texas Instruments struggled to keep up with the demand. If you received one for Christmas in 1976, then you were one of the lucky ones.
During 1977, around 1 million kids received a Little Professor as a present. The toy was launched by Texas Instruments on 13th June 1976, and was one of the first electronic educational toys. Texas Instruments made a whole variety of electronic gadgets during the 1970s and 80s, and I remember receiving one of their digital watches for Christmas in the early 80s, which featured a unique, luminous green background, rather than a back light.
Little Professor worked like a calculator in reverse, asking the user to answer an equation such as "4 x 2 =" using its red, LED display. I remember there was a choice of difficulty levels and you had three attempts at providing the correct answer. When you were incorrect (pretty often in my case!), the letters "EEE" would be displayed. The correct answer would be revealed after the third attempt, before moving on to the next equation. After a round of ten equations, the Professor would let you know how many first answers you gave.
The toy is a fine example of how a simple idea could be made into something very popular. With parents worrying that their kids were using normal calculators cheat at maths, a reverse calculator was a clever idea, and a great way for kids to actually learn arithmetic.
Version 2.0 was released in 1978, with another model released around 1980. 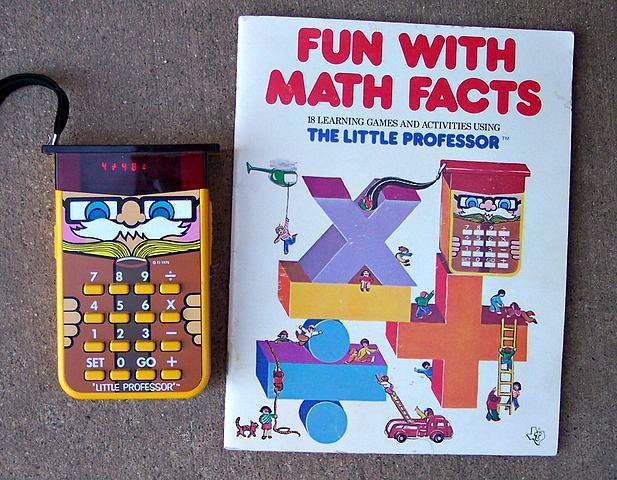 Enhanced image of Little Professor by Simplyeighties.com released with license CC BY SA-3.0

If you wish to use the image above, then simply copy and paste all of the text (with links) above into your own website/blog. 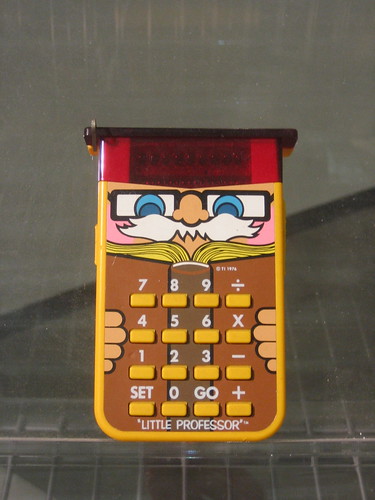 This is the latest version of the toy (which can be bought from Amazon UK) which looks more appealing than the yukky brown colour used in the 70s! 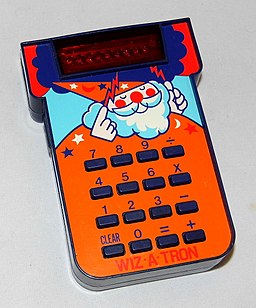 By Joe Haupt from USA [CC BY-SA 2.0], via Wikimedia Commons
Wiz-A-Tron was a similar, but less well-known calculator game by Texas Instruments which was sold in 1977 in the U.S. I never had one of these, but I believe it worked in a different way, and you had to type in the question and answer together (such as 6+6=12) with the Wizard giving you the correct or incorrect answer.
80s Toys and Games