Free HTML5 Game (for all formats)

In this retro 80s style game, you can go water skiing in Scotland - 8 bit style! The game features vertical scrolling and looks and plays very much like the old BASIC games that us computer geeks used to type in from magazine listings. However, such games were usually based around mountain skiing on the piste, so it's refreshing to play a game based around water skiing.

The concept is pretty much the same as with most skiing games, and you have to avoid the obstacles and stay within the flags. You will need to ski to the left of all red flags and to the right of blue flags. As you progress through the levels you will find occasional items to collect and you'll encounter mud banks that will slow you down and ramps to jump over. If you think the game is too easy then be patient. Levels will become longer and more tricky to master as you progress.

If you're playing the desktop version then click and hold your left mouse button and move the mouse to control your skier. In the mobile version you simply use your finger.

You will see four icons at the top right of the game. With these you can turn the sound on and off, change the appearance of your skier and choose a level to play. Please note that the latter two options won't be available until you have progressed through the levels.

A nice addition to the game is the recording of your times. When you beat a previous time in any level a record time banner will appear.

Well, I hope I've covered everything. Have fun, good luck and watch out for Nessie! 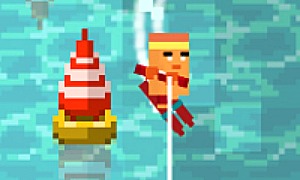