"Embarrassment" was remixed for release as a single, although it still retained the same running time as the original album version at 3:10. The single was released on 14th November 1980 and reached #4 for two weeks on 30th Nov while ABBA were at No.1 with "Super Trouper". The song was penned by the band's saxophonist Lee Thompson, with a little help from keyboardist Mike Barson.
Despite the song's jaunty melody, the lyrics are surprisingly dark. They are about the family turbulence caused by Lee Thompson's sister after she became pregnant with a black man's child. This led to her being rejected by her family, and the lyrics touch upon the shame felt by them. Of course, these were very different times and mixed race relationships are pretty commonplace these days.
Thompson only heard parts of the story through phone calls and letters. However, thankfully, their was a happy ending as when the child "Hayley" was born, the family's attitude changed towards both mother and baby.
Having learned what the lyrics are about, I have an even deeper respect for the band for tackling such a controversial issue. Particularly as they manage to combine such dark lyrics with a cheerful music hall melody.
To be honest, I never paid much attention to the lyrics of the song at the time - I was only 12 years old. It's ironic that in their early days the band developed a skinhead following, something that most of the band hated as they were associated with racism. However, the majority of skinheads were not racist, despite the media's ignorance and misreporting.
The video opened in a typically comical manner, with a band member standing in the middle of a busy street and opening his long trench coat to reveal his virtually naked body and a sign saying "Embaressment" (with the wrong spelling) covering his underwear. However, apart from a splattering of the Nutty Boys cartoon-like dancing, the majority of the video is pretty sombre for a Madness video, and was filmed in the darkness of the Embassy Club in London with band members playing amongst the machine smoke.
The single also reached #11 in Belgium and #4 in Ireland and The Netherlands. The B-side featured the track "Crying Shame" which was penned by Mike Barson.
"Embarrassment" was the band's fifth single release and was one of fifteen singles to reach the UK top ten. It was the second single to be released from the band's second album Absolutely and the follow-up to "Baggy Trousers". A third single was released from the same album in January 1981 entitled "The Return of Los Palmas 7", which reached #7. 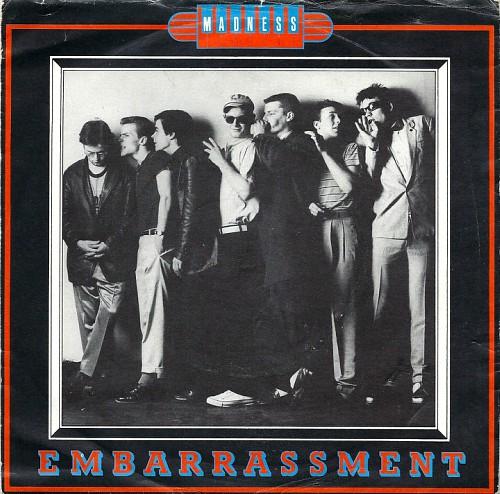 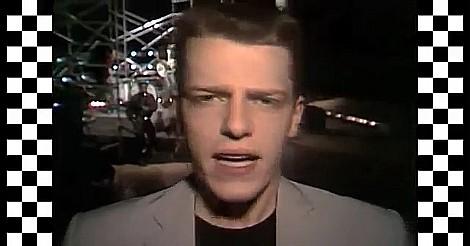