The band's eighth single was the second to be released from their third album 7, and was the follow-up to "Grey Day" which reached #4 in the UK. The song is memorable for its swirling piano and creative silent movie comedy style video, in which the Nutty Boys have a fun time dressed as cops and robbers. The song features as track two on side one of the album.
Released on 11th September 1981, "Shut Up" entered the UK singles chart at #22 on 20th Sept, climbing to #10 on 27th and reaching a peak position of #7 on 4th October for one week before slipping back down to #12 on 11th Oct. The single spent a total of 10 weeks in the chart.
The lyrics were penned by Suggs and Chris Foreman and tell the story of a criminal and his accomplices who are protesting their innocence. It's interesting that the song's title isn't mentioned anywhere in the song. The only band member to actually say "shut up" is Suggs near the start of the video. Apparently, the words were included in an early version of the song, as the final words of an extra verse which was left out of the final recording.
Chart Performance
The B-side is a track entitled "A Town With No Name". The 12 inch vinyl also includes an extra track "Never Ask Twice".

Although filmed in colour, the video reminds me of a Keystone Cops comedy, in which the band are dressed as police officers, with Suggs appearing as a dodgy used car salesman and masked criminal and being chased around by them. Watch out for the old Renault 16 and Austin Allegro at the start of the video.
Later on we see the band in suits and appearing to walk the walls of a dining room. Occasionally, the band are dressed as classic silent movie criminals (Suggs criminal mates) and are wearing stripy black and white tops. They first appear as criminals during the verse starting "It wasn't me either, I'm just his mate..." and individually mime to the lyrics.
During Chris Foreman's guitar solo, the band are dressed as cops and all gather around him.
Suggs wears two outfits in the video; his chequered suit and bowler hat, and also a plain black suit with bowler hat and also a burglar mask. 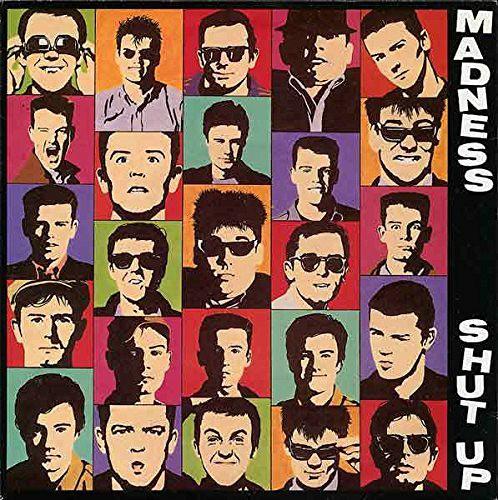 This second video features the band performing on Top Of The Pops and are wearing (more or less) the same suits as they wore for the sleeve of their 7 album. There is also a female dance troupe dressed as police officers, and it could possibly be Legs & Co., although I'm not too certain. 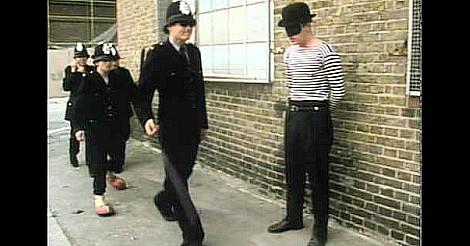 Lyrics for Shut Up

The Beat - Can't Get Used To Losing You