"Borderline" was released as the fifth single from Madonna's self-titled debut album on Feb 15th 1984 and became the singer's first top ten hit in the U.S., reaching No.10 in June. In the UK, the single wasn't a major hit until 1986, with it's first release in 1983 stalling at #56. The song entered the UK charts at #15 on 19th Jan 1986, while a-ha were at No.1 with "The Sun Always Shines On TV".  It reached its highest position of #2 for one week on 9th Feb. By this time, Billy Ocean was at No.1 with "When The Going Gets Tough, The Tough Get Going".
The track was penned and produced by Reggie Lucas (he produced most of the Madonna album) and it was remixed for its single release by John "Jellybean" Benitez, who was Madonna's boyfriend at the time.
"Borderline" was reviewed very positively by many critics at the time, and they generally agreed that it was one of the stronger tracks on the album. It's an up-tempo and bubbly synth-heavy tune which kind of hides the pain in the lyrics about an unfulfilled relationship, and they are actually rebelling against male chauvinism. If I were to take a gander at the sensual lyrics without knowing the song's upbeat melody, I would be almost certain that these were the lyrics to a ballad.
As with many of Madonna's more upbeat 80s songs, the vocals were pitched up, which makes her voice sound rather babyish. This practice was commonplace at the time.
Madonna's videos were often surrounded by controversy, and in this one, she breaks the taboo of mixed race relationships as she is seen with a streetwise, Latin-American boyfriend. It is typically playful and sexy, and there is a lot to focus on in the video, with many costume changes. It was filmed during January and February 1984 in Los Angeles, California and directed by Mary Lambert. She also went on to produce the videos for "Like A Virgin", Material Girl", "La Isla Bonita" and "Like A Prayer".
According to Lambert, much of the video was improvised with "no formula" and the storyline developed as filming progressed. It features a mixture of colour and black and white scenes, with Madonna wearing an array of different outfits.
It starts with the singer wearing an orange hairbow and sleeveless denim jacket dancing with her streetwise friends and boyfriend. A photographer shows interest in her and gives her his business card, much to the annoyance of her boyfriend. She is then seen with him being driven off in a white, open top sports car to a photo shoot.
We then see Madonna at a swimming pool wearing a vintage, frilly bathing costume being photographed. Later we see her back with her boyfriend, dressed in denim and this time donning a white hair bow. After this, she is wearing another outfit with black hair band, wayfarer shades, black tank top and hoop/crucifix earrings, patterned skirt and lime green socks and orange stillettos.
For her final outfit, Madonna is wearing an elasticated, black and white, floppy striped hat (possibly a vintage bathing suit cap) with an oversized, black hair bow attached to the front, a black leather jacket and white T-shirt, loveheart earrings and lace, fingerless gloves. This is the most iconic look in the video. 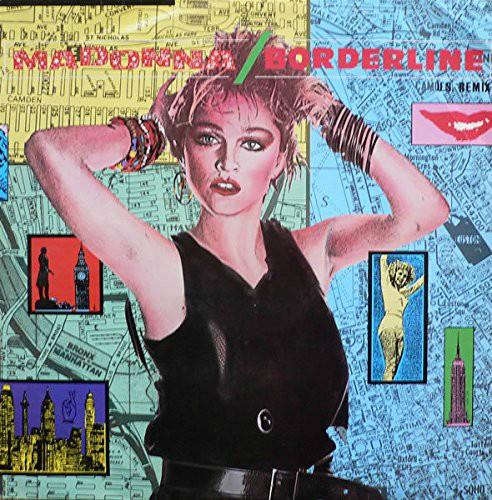 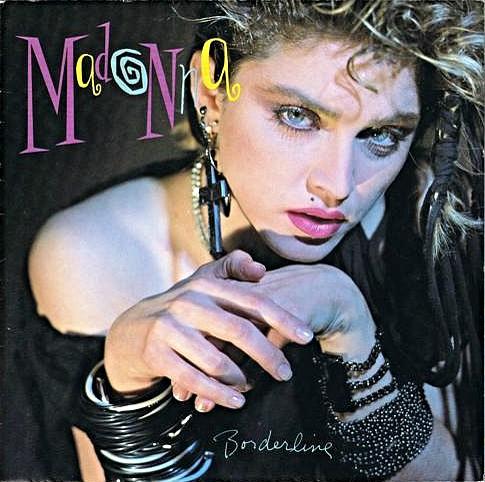 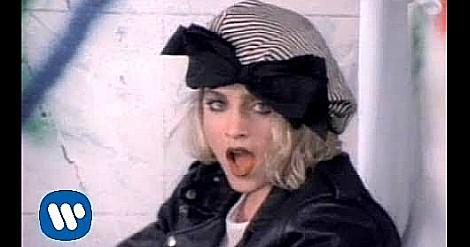