Now, here's a toy I'd completely forgotten about until I recently saw an image on Pinterest. Major Morgan was a hand-held electronic musical toy that looked like the drum major of a marching band. It was produced by Playskool (from 1979) and ran on a 9 volt battery which you had to slot into the back of his head.

I can't remember whether a battery came with the toy, although, I remember there were a lot of toys around at the time which included the dreaded "batteries not included" message, which left you with a pile of toys you couldn't use at Christmas because your parents were in such a state of panic buying presents they hadn't spotted the message.

Each of the sixteen squares on the front of the Major represented a musical note from A to G which you would press to create a tune. As the area you pressed was membrane (just like the Atari 400 keyboard) after a while your finger started to hurt and over time you would find yourself having to press harder just to get a sound out of the damned thing.

A pack of cards was included with the toy, with each one featuring colours, symbols, shapes etc. You would simply slot one of these into Major Morgan's rather large slot to play different tunes such as Twinkle Twinkle Little Star, Row Row Row Your Boat and Yankee Doodle.

By the way, don't miss the video clip which features a selection of vintage electronic toys and is narrated a guy with a beatles style basin haircut called Weird Paul. 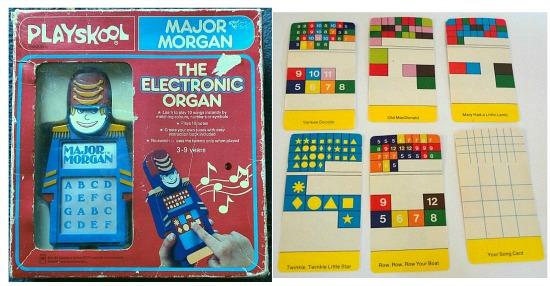 Here we see an original 80s toy in its box with six of the music cards on display.
Main 80s Toys page
80s Toys You Can Still Buy