This classic comes from the early platform gaming era. It was originally created for the ZX Spectrum and released by Bug-Byte in 1983, and was later ported to other home computers and consoles. This flash version is based on the Speccy version - the game was notable for being the first Spectrum game to include in-game music.

How to play: The idea is to help Willy explore the 20 caverns and collect the various flashing objects before his oxygen runs out. Once the object collecting has been acheived you will see a flashing portal which Willy must walk to to be transported to the next cavern. As with most platform games there are numerous nasties to deal with including spiders, slime, poisonous pansies and manic mining robots. Precision is required to jump at the right moment to avoid bumping into the nasties and reach another platform, or another part of an existing platform.

Controls: click over the game with your mouse (if you have one) and then press enter to start. Use the left and right arrow keys to move Miner Willy and press the space bar to jump. How to get started on the first level "Central Cavern"; Walk right so that you pass the green shrub which is on the platform above and then jump onto the first platform. Walk right again and jump onto the brick wall. Be careful when you pass the brick wall as the platform after this will collapse beneath you as you walk along it. Jump to grab the flashing key. Now to the trickiest part - the conveyor belt! You'll need to jump just at the right moment to avoid the two shrubs on the two platforms and then jump over the robot. After this, move to the top level and watch out for the slime when you jump. Avoid collecting the second from last key (as it's too close to the shrub) until you have collected the last one and then collect it on your way back as it's much easier. Now carefully make your back to the portal at the bottom right of the screen. I'm not going to tell you how to complete each level (how cruel I am), but you get a good idea of what to expect with collapsing platforms and enemies walking around where you don't want them to be. Actually, I'm not that cruel and I have included a walkthrough video below. However, I would advise you not to watch it unless you're absolutely stuck on a level as it really does spoil the enjoyment of the game. Manic Miner is a pretty time-consuming game. Be warned! You'll find yourself playing for hours, so don't start unless you have plenty of spare time!
Retro Gaming Mugs 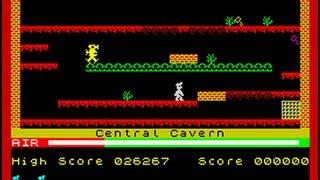