Melody Maker was a weekly music paper/magazine published by IPC Media in London, and was always viewed as a more serious publication aimed at a more discerning and older rock music audience.
Although the majority of visitors to this page will only remember the magazine in the 70s, 80s and 90s, it was actually founded way back in 1926. However, the paper was aimed at a very different audience back then, focusing on dance band musicians and jazz music, with the jazz writer and journalist Max Jones as one of its staff members.
As you will discover, the publication was tugged in many musical directions by the numerous editors that came and went during its seven decade lifetime. But it maintained a non-populist and individualistic view for a good slice of this time, attracting a niche audience of musicians and fans of folk music, prog rock and jazz.

With rock and roll music gaining populariy durng the 1950s, a rival magazine New Musical Express launched in 1952. With MM failing to realise the growing popularity of the new musical genre, it quickly lost readers to its rival. In an effort to gain old and new readers, the magazine launched a weekly Top 20 singles chart in April 1956, followed by an LP chart in 1958, although Record Mirror had already launched their own album chart in 1956.
With the rise of pop music during the 1960s, the Melody Maker writers were keen to maintain an image of being a more intellectual music publication, and less focused on the teen market like some of its rivals. Pages on folk, jazz, and reviews of musical instruments helped the magazine to draw in a mainly older audience, with a good slice of these being actual musicians. Writers included Richard Williams and Michael Watts. 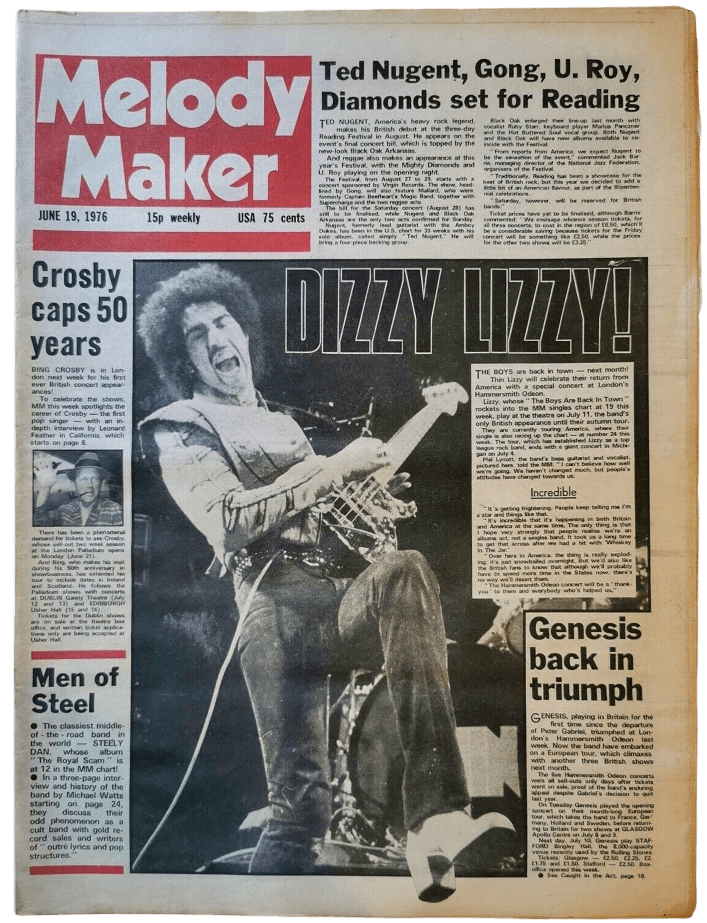 During the 1970s, Melody Maker was heavily focused on the prog rock bands of the time such as Pink Floyd, Yes and Jethro Tull. However, it did catch on to the punk scene quicker than NME, and also devoted space to teen pop acts such as David Cassidy and The Osmonds, and also glam rock which became hugely popular during the 70s.
One of the lead writers and critics, Michael "Mick" Watts, helped many musicians of the day to ignite or reignite their musical careers, more famously David Bowie, who's popularity surged after a 1972 interview with him was published on 22nd January. Bowie had spent a couple of years in the pop wilderness, with no charting singles or very few public performances since his 1969 No.1 hit "Space Oddity". Writing about Bowie's latest album Hunky Dory, Watts stated that it "combines a gift for irresistible melody lines with lyrics that work on several levels".
Watts toured with and interviewed many popular rock bands including Bruce Springsteen and Bob Dylan.
After leaving the publication to work at Island Records, Richard Williams returned in 1978 as the new editor and decided it was tme for a change of direction for the magazine. Recruiting new staff to write about post-punk, reggae and soul music. However, this caused conflict with editor-in-chief Richard Coleman, who wanted the magazine to stay more conservative, and despite Williams trying to commission a more contemporary look, this was rejected by Coleman. 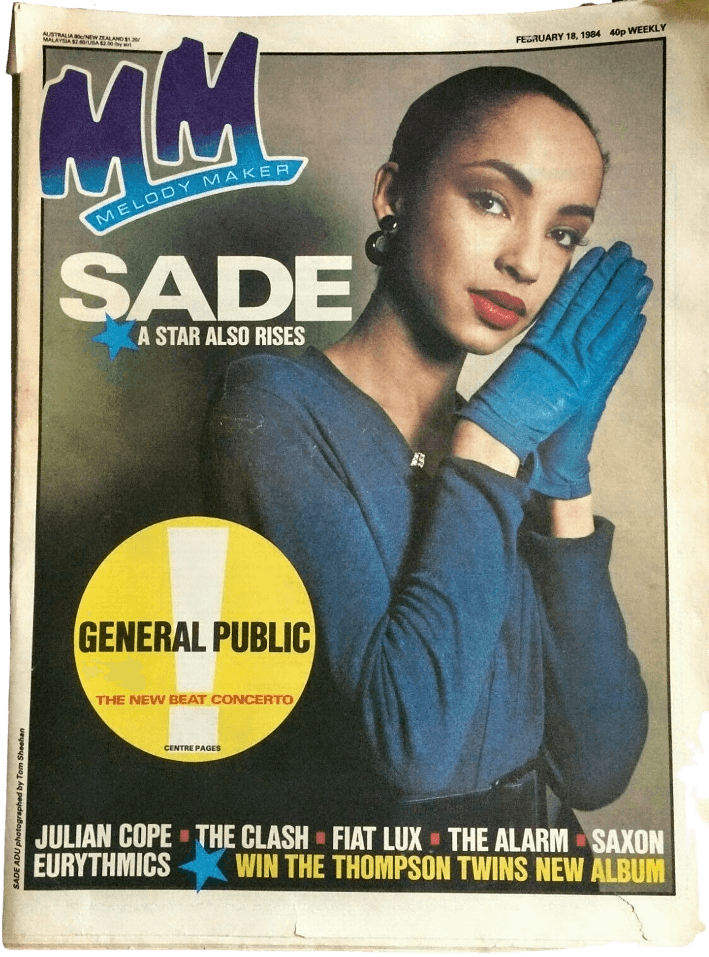 Inevitably, feeling frustrated, Williams left in 1980 and Coleman steered the publication back to its folk and prog rock years, causing its unhappy staff to move to NME and The Face. With a decline in sales and confusion about which direction that Melody Maker was actually taking, Coleman left in 1981, and the paper was finally given a facelift the same year and retitled "MM". It started focusing on chart pop acts including Soft Cell and Duran Duran.
10 years after joining as a staff writer, Allan Jones became editor in February 1984, changing the paper's musical direction once more, moving away from teen pop to alternative rock and indie bands such as The Smiths. The paper also regained its full title in October 1984.
New writers joined in 1986, giving the publication a more intellectual feel. By this time, rival paper NME was facing its own in-staff battle about which direction to take, with some wanting to focus more on the emerging rap and hip hop scene, and others wanting to stick with rock and indie, with the latter eventually winning out. 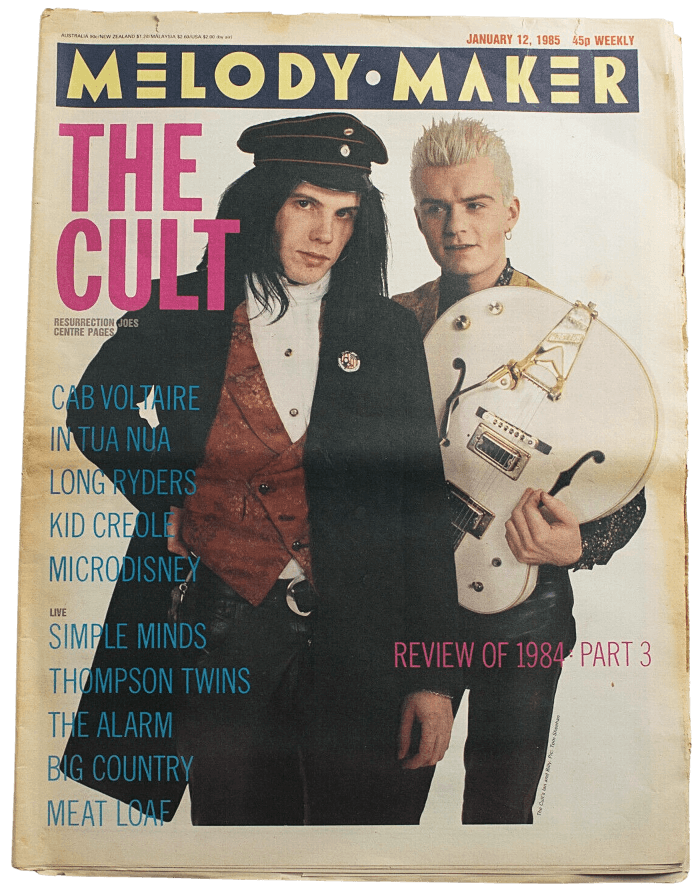 The Cult frontman Ian Astbury with guitarist Billy Duffy on the front cover of Melody Maker for the week Jan 2th 1985.

One of the regular sections I really remember from around the mid 80s was It's Alive, which reviewed live gigs. There was also a singles review section with reviews by Mick Mercer and Andy Kershaw, the latter being the host of The Old Grey Whistle Test from 1984 to 1987, and a Radio 1 DJ starting in July 1985.

During the 90s, the Melody Maker continued with its non-populist reviews, covering mainly rock, indie and the new grunge scene. However, it did devote some space to post-rock and electronic music genres including hip-hop and rave.
What made the magazine stand out from its rivals was it's uncompromising views on popular bands of the time. While most publications were praising britpop acts such as Blue and Oasis, the staff at MM were not afraid to allow harsh criticism of the bands.
In an effort to maintain it's niche audience of professional musicians, MM continued to run classified ads and reviews of demo tapes musical instruments, although these sections now seemed somewhat out of place with the rest of the paper.
As with the previous decades, there were many staff changes during the decade, with many different writers and editors during this period.

Despite relaunching as a glossy magazine in 1999, declining sales led to its demise, and it merged with NME in 2000, also published by IPC Media.
Comparable to Mick Jagger (a wrinkly rocker that needs pensioning off), the veteran publication had finally come to the end of its shelf life, with a final circulation of little more than 30,000 readers, and declining advertising revenue.
Nonetheless, Melody Maker will be remembered as a musician's paper, and was an important part of the music scene, with it's classifieds section helping many great bands to form and find new talent.