Mercenary was the second game to be released by Paul Woakes' and Bruce Jordan's Novagen Software company, initially for the Atari 8 bit computers, before being converted to the C64, ZX Spectrum, Amstrad CPC, Atari ST and Commodore Amiga.
Today, open world games (such as GTA5) are commonplace. However, releasing an open world game with no set levels or structured gameplay back in 1985 was a pretty brave move, and this type of game was truly something of a rarity back then.
There is a plot of sorts and many goals to achieve, but how you achieved these was entirely up to you! Basically, an entire planet had been crammed into 64k of memory (48k on the ZX Spectrum and Atari 400/800), which was an impressive feat indeed. The use of vector graphics was the only way to achieve this, of course. 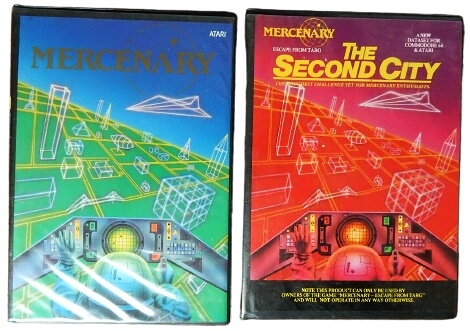 According to the game's inlay card "Mercenary is a unique combination of flight simulator, adventure and arcade fun in stunning high-speed, three dimensional vector graphics".
Thankfully, Paul Woakes was a master of his craft, and Mercenary received rave reviews from the critics of the day. Indeed, Woakes has gained a cult following since then, and there is even a website called The Mercenary Site, which although looks like it hasn't had a design update since the early noughties, features a wealth of info about both the game and Novagen.
Having been thoroughly impressed with the speed and gameplay in Novagen's debut 3D game Encounter on my Atari 800XL, I couldn't wait to get my hands on a copy of Mercenary. It was £9.95 on cassette, which was generally the price for many of the full-priced titles back then. 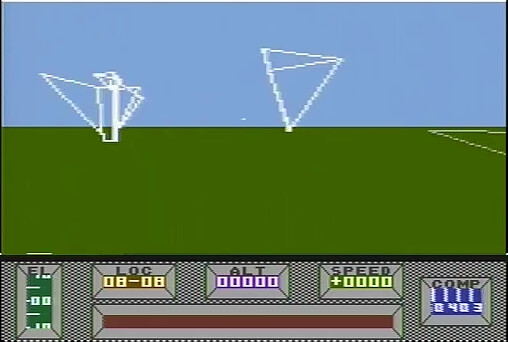 Mercenary on an Atari 800XL

There were two versions on the Atari 8-bits, fast 48k for the 400/800 and hi-res 64k for the XL/XE models. After waiting for the game to load (loading times were actually impressive for a cassette game thanks to Paul Woake's revolutionary Novaload system), I was not to be disappointed. After crash-landing the Prestinium craft on Targ, I discover that I am now stranded, and that I will now need to acquire a new ship to leave the planet. Unfortunately, I'll need a vast sum of money to do so!
Instantly, I am transported to an exciting, futuristic 3D world of real-time vector graphics, initially travelling across the vast lanscape on foot, before encountering one of the many vehicles across Targ to speed up the travel process. Benson, a ninth generation personal computer assists me, and is my only friend. He displays a scrolling ticker to keep me updated, accompained by an 80s sci-fi style bleepy effect. Benson also lets me know how well I am progressing, sometimes with some amusing sarcasm thrown in.
What is truly impressive is that the 3D graphics are flicker free. They are obviously a little juddery, but this is due to the hardware limitations and low processing of the 8 bit computers, and not even a programmer as talented as Paul Woakes could overcome this.
As the player chooses how to engage with the game, it's very easy to get into. You learn from Benson that the planet is occupied by the indigenous Palyars, who are at war with the Mechanoids, a race that wants to take the planet from them. You can choose to fight as a mercenary for either side, or simply operate as a free agent, avoiding conflict altogether. The beauty of the game is that you can switch sides whenever you wish. 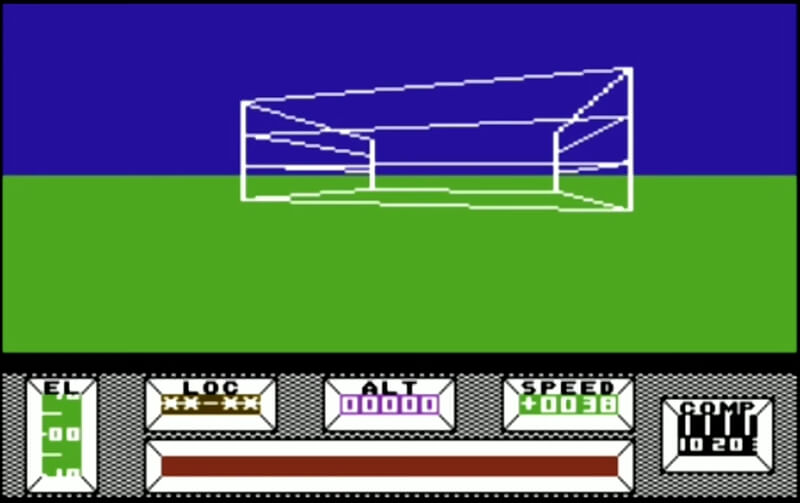 There are over 100 locations to explore, which is pretty huge for an 80s video game, and many locations also have mysterious subterranean complexes, too, and you can enter these via an elevator. As well as walking around these vast complexes performing tasks and gathering clues (many are like mazes and it is all to easy to lose your way), back above ground you also can engage in aerial combat.
There is so much depth to the game that, sadly, it's a title I never found the time to complete. Nonetheless, I spent many, many hours absorbed in the game, which was truly like being in another world, much to the annoyance of my parents! As someone who sometimes struggles with the real world, I am truly grateful to Novagen for providing me with an entertaining form of escape. Mercenary certainly deserves to be recognised as one of the most imspiring and innovative 3D games ever to be released.
An expansion pack entitled Mercenary: The Second City, was released in 1986, which featured red land and a pink sky. I believe the sky was yellow on the ZX Spectrum version and blue on the C64. This game had a more eerie feel, but you needed to have already bought the original game to play it.

Now, I was thinking how wonderful it would be if Mercenary was released for the PS5. Sadly, Paul Woakes passed away on July 15th 2017, so it's extremely unlikely to happen now. This was a great loss to the old school gaming community. You felt truly isolated in his games (in a good way) which helped to create a real sense that you were exploring a menacing, alien atmosphere. This somehow seems to be lacking in modern games, despite the superior graphics and sound capabilities.