First up, you really need to see this very amusing review of the Atari 2600 console and the Missile Command Rom game by Rob the Robot - there is a little bad language so please be warned!

Missile Command turned out to be a huge money-maker for Atari. It was originally released into the arcades in 1980 by Atari inc., but also licensed to Sega for the European versions of the game.

The basic idea of the game is to defend six cities from incoming ballistic missiles using anti-missile batteries. The player moves a crosshair across the screen and must fire ahead of each missile just at the right moment.

One thing's for sure, Missile Command exemplified the constant threat during the 80s that we were all going to die in a nuclear missile attack, as did Frankie Goes To Hollywood's "Two Tribes" single.

The original arcade release was (1980) was designer by Dave Theuruer, who was also responsible for those iconic vector graphics in Tempest. His first game for Atari was Four Player Soccer released into the arcades during 1979/ It was the sequel to the 1978 game Atari Football.
The Atari 2600 port (1981) was created by Rob Fulop and this version became the third best-selling title for the console. Fulop also created Demon Attack for the 2600. 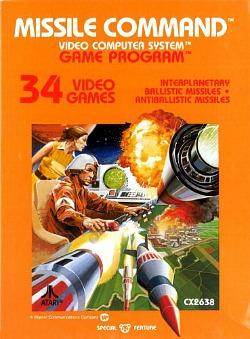 Even with the improved graphics on the 16-bit ST version, somehow, it lacked the excitement of the earlier versions on the Atari 2600 and 8-bit computers, proving that graphics aren't the most important factor in a game.