Firstly, the video clip above is from our Youtube channel and shows me playing Moon Racer for the first time until I lose my life, which is why the video lasts for little over a minute! You only have one precious life which is frustrating! Nonetheless, the raw and unedited clip does give you a good idea of what to expect in the game.

Moon Racer is a 2D, side-scrolling shooter based on the classic 1982 Moon Patrol game by Atari. At the start of the game you are presented with three options - start a new game, leaderboard and settings. I was pretty disappointed with the settings, as the only option I was given was to turn the sound effects on or off. A choice of difficulty levels would have been appreciated.

The player takes control of a heavily-armed buggy and the idea of the game is to travel for the longest distance possible. There are just two controls to master. Tap "jump" on the left of the screen and "fire" on the right of the screen.

The jump option is used to avoid falling into a crater, and also to grab a rotating shield for your buggy. It comes with an accompanying electronic "whoosh" type of sound. You can also try and jump mounds, although this will often end in disaster as a crater will often appear close to it.

Tap "fire" and a vertical and horizontal missile will launch from your buggy and, hopefully, hit its target. You can destroy mounds and alien enemies.

Moon Racer is a continuous, one level game and becomes progressively harder to play. It's rather boring to play for the first couple of minutes and there is little in the way of alien action. Eventually, static UFOs will appear on the moon's surface which you simply jump over or fire at several times. However, they do not fire back and are, therefore, pretty pointless. The game gets a little more exciting when airborne alien craft appear and start firing at you. These are nicely designed and make things slightly more challenging, and I do like the fact that the gameplay is random and not exactly the same each time you play it, too.

However, while I can't fault the responsiveness or scrolling speed of the game (it's pretty fast), the gameplay is just, well,  pretty dull. There simply aren't enough alien attacks and you find yourself spending too much time simply jumping over the craters and shooting mounds which quickly becomes tedious and mundane. The lacklustre starry background scenery is also very disappointing - the original Moon Patrol featured two separate mountainous backdrops which scrolled at different speeds to give the illusion of distance.

The free version displays an ad each time you crash. This is a little annoying, but there is an option to buy the ad-free version for just 71p. If you like the game, then this is a small price to play.

Everything is in place for Moon Racer to be a very good game, in particular, the fast scrolling and the inventive sound effects. But it needs excitement in the form of more enemy attacks. Add these, beautify the backdrops and this could be a stellar game! 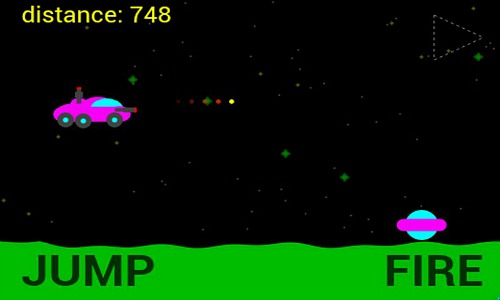 That UFO thingy looks like a lolo ball/pogo bal toy. It's very 80s, but does absolutely nothing! 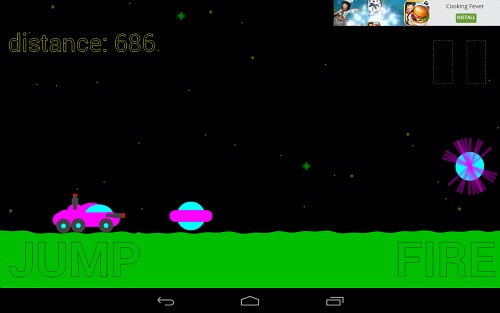 Taking screenshots on an Android tablet during gameplay is a tricky business, but I just managed to capture this one with a different alien, just before I crashed!