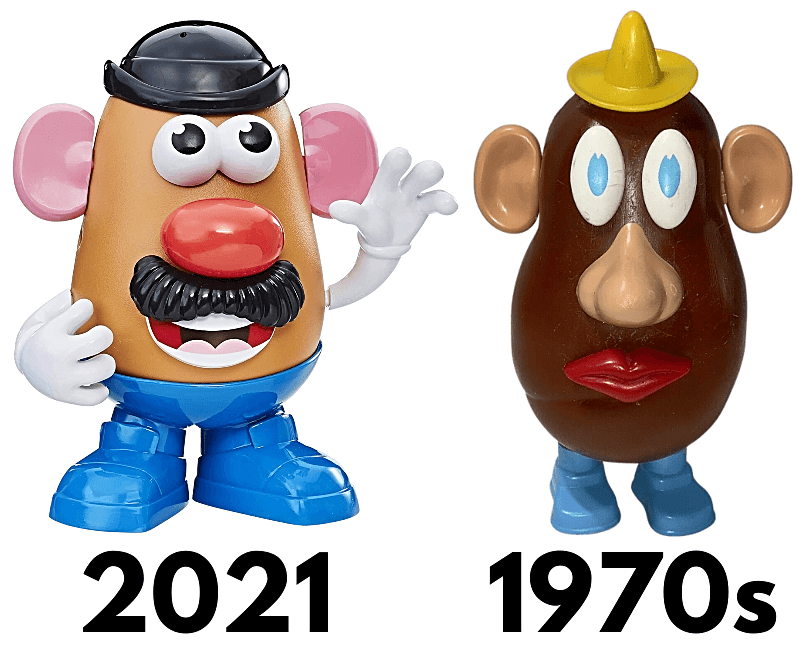 Do you remember recieving a Mr. Potato Head toy for Christmas? Well, I certainly do, and just about anyone who has ever played with him will remember the joy of creating a unique funny face by sticking the various parts into the potato-shaped body, including eyes, nose, ears, mouth and various hats.
Today the character is best know for his role in the Toy Story movie franchise, but back in the 1960s, 70s and 80s, he was a hugely popular plastic toy that just about every child wanted for Christmas.
Did you know that the original Mr. Potato head toy was actually made from a real potato? He also ran for mayor in 1985 (breaking a Guinesss World Record in the process), turned green in 2020, and then became gender-neutral in 2021 - I'll come to all of that in a moment! 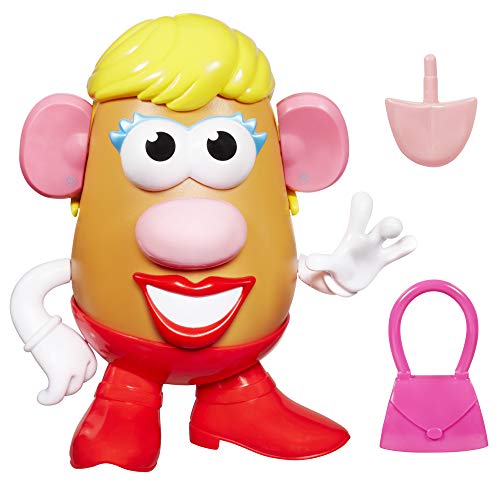 The Inventor played with Potato dolls

That sounds kind of weird, but many kids had to use their imagination and  make their own fun before the introduction of mass-produced plastic toys. The Original toy was created by the American inventor George Lerner, who gained inspiration from his own childhood, when he was making dolls from potatoes with his younger sisters. Apparently, he used to use other fruit and veg including grapes and carrots to create funny facial features. He also watched his young nephew place sticks into a potato to create a funny face. He came up with the idea for a toy during the 1940s.

This is true, but for obvious reasons the potato was not included in the kit! Launching in 1952, the original kit sold for less than a dollar - $0.98 to be precise. That was because no plastic body was included. Instead, kids (or parents) had to find a real potato to stick the plastic parts into. Around one million of the kits were sold during its first year. Mrs. Potato Head launched in 1953, followed by Brother Spud and Sister Yam to create a whole family.

Mr. Potato Head was rejected by toy makers in the 1950s

Lerner's idea for the toy proved to be controversial in the 1950s. His idea was to sell the toy as plastic parts that could be stuck into real potatoes. With food rationing in the second world war still firmly engrained in the memories of Americans, the idea that kids would be using real potatoes as toys was deemed to be hugely wasteful, and the toy manufacturer's rejected his idea. 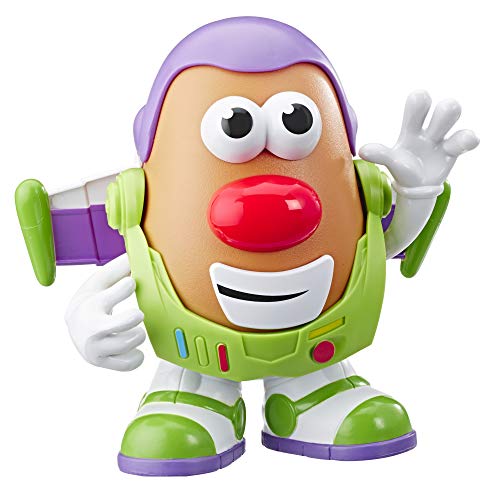 Mr. Potato Head was Given Away Free With Breakfast Cereals

Despite his idea being rejected time and time again, during the 1950s, Lerner finally managed to convince a food manufacturer to include the plastic toy parts in breakfast cereals. Of course, this helped to massively boost the sales of cereals, and kids got a free Mr. Potato head toy - everyone's a winner!
After Lerner contacted the small toy manufacturer Hassenfeld Brothers (who went on to become Hasbro) to show them his toy idea, they paid $2000 to the cereal company to stop production, and bought the rights from Lener for $5000.

Mr. Potato Head was the first toy to be advertised to children

Although it wan't the first toy advert to be shown on TV, it was the first TV advert to be targeted directly towards children, which was a major breakthrough at the time. Previous toy ads on TV were marketed towards adults. The conroversial new ad first aired on April 30th 1952. 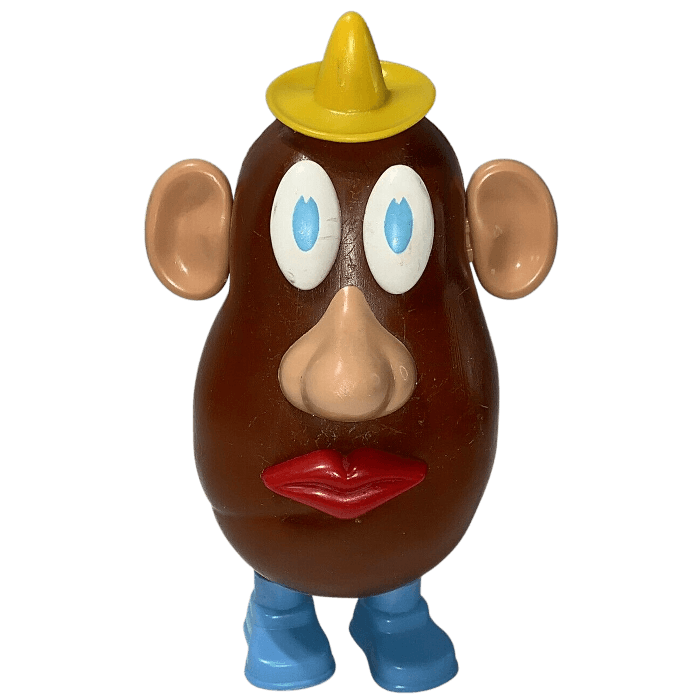 Mr. Potato Head Doubled in Size during the 70s

Regulations drawn-up by the US government in the 1960s demanded that the plastic parts became "less sharp". This caused a headached for Hasbro as it meant they couldn't penetrate a real potato easily. So in 1964, the toy company started including a plastic body in the kits, although, sadly for parent, this also included a price increase.
In 1975, the toy doubled in size, and this was mainly because of new toy safety regulations regarding small parts.

Yes, it's true! I've actually no idea who the person was in reality, but A Mr. Potato Head impersonator ran for mayor in Boise, Idaho in 1985. Sadly, he only received four votes, but that was enough to put him in the guinness book of records as "most votes for Mr. Potato Head in a political campaign".

No, we're not talking about the colour green, thankfully, as no one wants a green potato, unless they enjoy having an upset stomach! A sustainable version made from sugarcane-based plastic was launched in 2020. The Mr. Potato Head Goes Green toy is sold exclusively on Amazon. 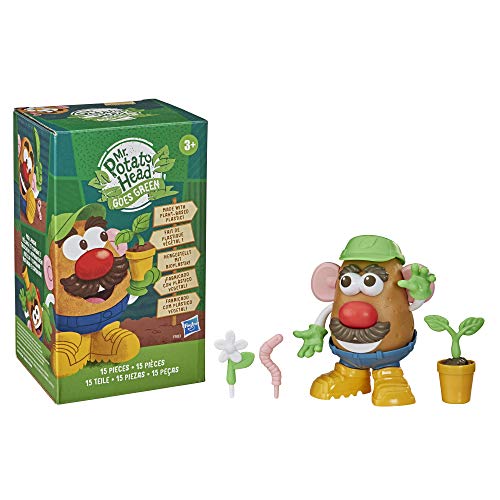 The toy made the headlines during 2021 when it was announced that Hasbro was planning to drop the "Mr." from the title in a move to make the character gender-neutral - PC madness strikes again!

However, while the story made an sensational attention-grabbing headline, in truth, they only dropped the "Mr." from the title of the entire range, rebranding the toys Potato Head. The Mr. and Mrs. Potato head toys are still available to buy separately - well, thank goodness for that! 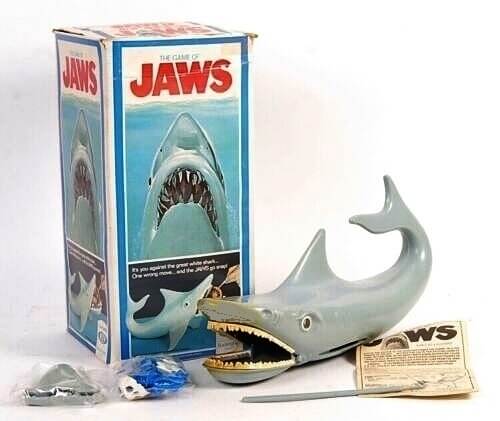 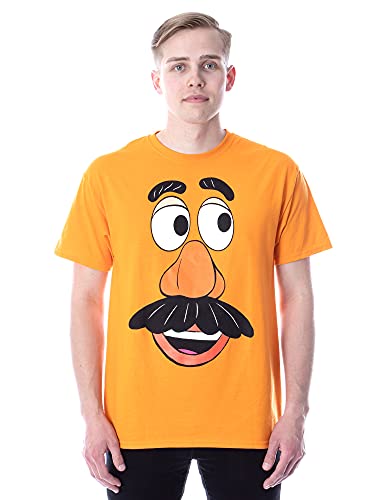