What I remember most about this song is the very memorable performance on Top Of The Pops. Lead singer Les Gray sang to a ventriloquist's dummy, while guitarist Rob Davis wore Christmas tree baubles as earrings.
The single was sung very much in the style of Elvis, and many would argue that it's a simply a re-working of "Are You Lonesome Tonight". Nonetheless, Mud's song features original lyrics and stands out on its own. It's played each festive season without fail on major TV and radio stations, which is testament to the solid song-writing skills of Chinn/Chapman. The song gave the glam rock band their second chart topper in the UK, and it remained their for four weeks. The B-side included the track "I Can't Stand It".
The song was penned by Mike Chapman and Nicky Chinn and sold around 750,000 copies, making it one of the best-selling Christmas singles in the UK. Chapman and Chinn wrote dozens of hit singles during the 1970s for artists including Suzi Quatro and Smokie, and in 1973-74 achieved success with nineteen Top 40 hits. 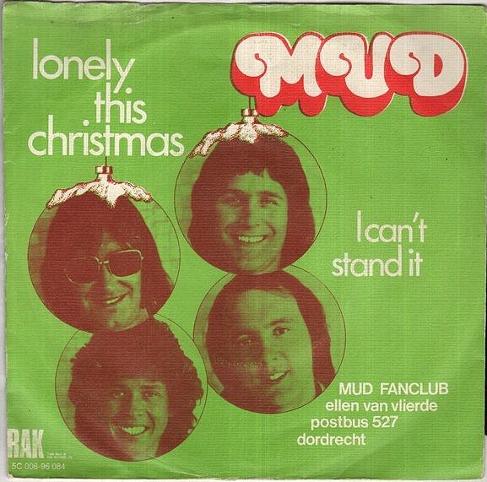 Mud formed in 1966, with many of their later songs featuring a 1950s rock and roll vibe. Indeed, many of their singles were covers, and the band reached their peak in 1974 and '75 when they achieved three number one hits in the UK with "Tiger Feet", "Lonely This Christmas" and "Oh Boy". Other Top 5 hits included "The Cat Crept In" and "The Secrets That You Keep".
Sadly, lead singer Les Gray died on 24th February 2004 from a heart attack. He had been battling against throat cancer. Gray had been living in the Algarve in Portugal with his wife since 1992.

Lyrics for Lonely This Christmas