NIK KERSHAW "WOULDN'T IT BE GOOD"

Unlike many struggling 80s pop stars, chart success came pretty early for Nik Kershaw, with his second single release "Wouldn't It Be Good" breaking into the UK Top 5.
Initially, it appeared that the single would go the same way as his debut release, stalling outside the Top 40 - the single entered the UK singles chart at #53 on 22nd Jan 1984, while Frankie Goes To Hollywood were at No.1 with their controversial single "Relax". However, the single climbed the chart surprisingly quickly, reaching a peak position of #4 on 26th Feb, where it remained for three weeks. During this time, Nena was at No.1 with "99 Red Balloons".
The B-side included a non-album track entitled "Monkey Business". This was later included as an extra bonus track on the 2012 reissue of Human Racing.
The single was partly created using a Yamaha DX7 synth, and it's presets were used on a huge number of pop songs during the 80s. It was produced by Peter Collins, who has produced a huge number of 70s and 80s artists including Blancmange and Gary Moore.
The track was released as the follow-up to Nik's debut and lead single from the album Human Racing, "I Won't Let The Sun Go Down On Me", which initially reached #47. This was re-released after the success of "Wouldn't It Be Good" and "Dancing Girls", this time reaching #2.
The song was released on 7" and 12" maxi vinyl, the latter including the Special Extended Mix (6:50).
"Wouldn't It Be Good" also features in the 80s film Pretty In Pink, although it was a cover version by Danny Hutton's Hitters.
The Video
Directed by Storm Thorgerson for Greenback Films, the video was played frequently on MTV, although the single would still only reach #46 in the U.S. It was filmed mainly around the St. James Court Hotel in London, with the final scenes filmed at the Mullard Radio Astronomy Observatory at Lord's Bridge in Cambridgeshire.
The video has a vintage feel and makes good use of 80s video effects. It opens with two men who are each wearing a Trilby hat and raincoat (possibly spies or gangsters) talking to each other and then observing Nik Kershaw walking past a vintage car and towards the St. James Court Hotel. He is wearing a very bright, white vintage suit with white tie and white shoes, and carrying a briefcase. The only sound we hear is the heavy breathing of Nik.
The extended music intro kicks in at 0:34, and during this time, Nik climbs several flights of stairs and eventually finds his way into his room, showing a huge sigh of relief as he leans against the door and drops a large pebble from his hand, which appears to briefly glow.
His vintage suit then transforms into a white 80s jumpsuit, as Nik walks around the room, briefly looking out of the window at the night sky and then fiddling with some knobs on some vintage scientific equipment and a bulky remote control. Kershaw's outfit continuously displays different patterns and video footage, while he continues to walk around and eventually onto a balcony. He then takes a tube from the scientific equipment and ventures outside.
A group of six unsavoury-looking characters walk towards him - including the two gangster types from the start of the video - causing him to stumble and drop the tube. He crawls along the ground, struggling to stand up, and eventually runs away from the group who are menacingly singing the lyrics at him. In the final scene, Nik runs towards a giant radio telescope which is emitting a white beam towards space, before he dissolves in a Star Trek style.
Overall, this is a pretty decent video and makes for intriguing viewing as you try to decipher exactly what is going on. Along with the song, which is a fine example of Kershaw's top quality songwriting skills, it's certainly up there among the better pop releases to come out of the 80s.

Lyrics for Wouldn't It Be Good 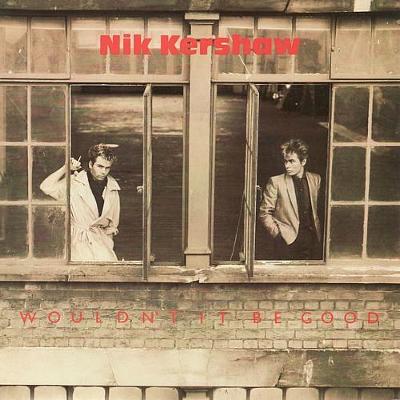 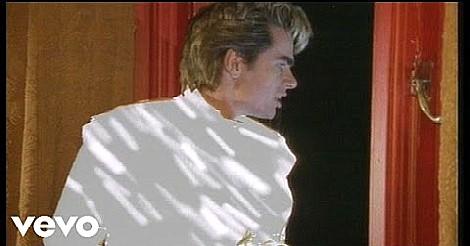