So do you remember when breakdancing was all the rage back in the 80s?
The American breakdancing pop duo Ollie & Jerry are best remembered for their 1984 top ten hit "Breakin'...There's No Stopping Us", which became an 80s one hit wonder in both the U.S. and UK, after their follow-up single "Electric Boogaloo" failed to break into the Top 40, stalling at #57 in the UK and failing to chart on the Billboard Hot 100.
Drummer Ollie Brown and singer Jerry Knight formed their pop double act in Los Angeles, California, after working together in the R&B group Raydio - Knight was the vocalist and Brown was a session drummer. They were signed by Polydor and recorded the title theme to the movie Breakin', which was also the first single from the soundtrack album for the film.
"Breakin...There's No Stopping Us" entered the UK singles chart at #35 on 17th June 1984, climbing to #8 the following week and reached a peak position of #5 on 1st July, in the same week that Frankie Goes To Hollywood were at #1 with "Two Tribes" and #2 with "Relax".
The 12 inch single included Breakin' ... There's No Stopping Us (Club Mix) 6:51
Breakin' ... There's No Stopping Us (Instrumental) 5:33
The drum parts were created using Roland TR-808 and Linn LM-1 drum machines which were widely used by pop artists during the 1980s.
The video mixes street break dancing with footage from the movie, and features Jean-Claude Van Damme in his first on screen appearance as a film extra at 2:30, although he was uncredited - can you spot him?
The single also reached #7 hit in New Zealand, #27 in Belgium and Holland and #25 in Australia.
Ollie & Jerry split in 1985 after the poor chart performance of their follow-up single "Electric Boogaloo" and never created an album.
A cover by DJ Luck and MC Neat (featuring singer JJ) reached #8 in the UK and #38 in Australia during 2000.

Lyrics for Breakin'...There's No Stopping Us 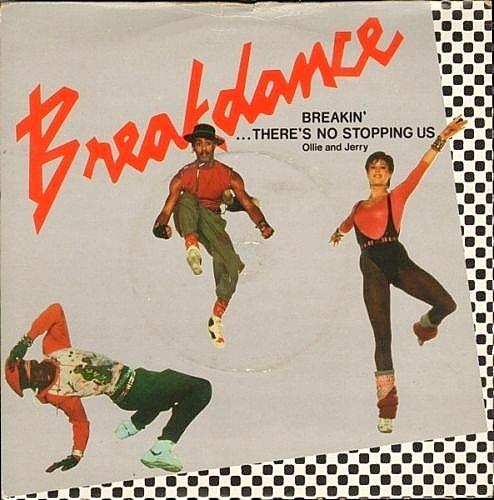 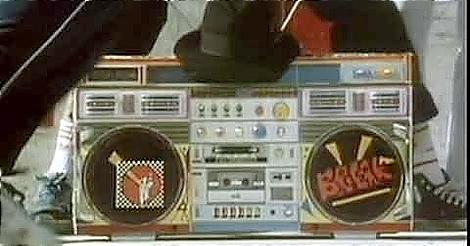