I was saddened to hear on the news that one of Britain's favourite entertainers from the 80s, Paul Daniels, had died after suffering from an incurable brain tumour. Therefore, I thought it was high time for me to add an article about the magician, to show my appreciation for his work.

Now seen as a national treasure by many, during the 80s, Paul Daniel's magic shows were a regular feature on our TV screens, as well as shows featuring other magicians such as Ali Bongo. In the U.S., extravagant shows by illusionists such as David Copperfield were eventually ported to the UK.

However, in the UK, magicians had to rely on much smaller budgets and the shows were rather more more down-to-earth, but distinctly British. Our most well-known home-grown magician is, of course,  Paul Daniels, who entertained us for 15 years from 1979 to 1994 with The Paul Daniels Magic Show, as well as presenting several quiz shows.

Daniels developed a keen interest in performing magic tricks from an early age. However, it would be some time after leaving school before he would pursue becoming a professional magician.

Paul's first job was for Eston Council as a Junior Clerk. Daniels then served in National Service (he spent a lot of time in Hong Kong) before training as an accountant for local government. He then helped his parents with their grocery business, before deciding to set up his own grocery shop. During this time, Daniels would put on magic shows in his spare time for youth clubs, parties and nightclubs, eventually naming his act Eldanis (an anagram of his surname) and performing in the evenings with his first wife, Jacqueline Skipworth as his assistant. It was during his time performing as Eldanis that Daniels developed his amusing catchphrase "You'll like this... not a lot, but you'll like it".

Daniels suffered with thinning hair from quite an early age, and he eventually decided to wear a wig for his act. One of his wigs sold for £1,100 on ebay in 2011, with the proceeds going to charity.

It was in 1969 that the budding magician got first first breakthrough, when he was offered a summer season at Newquay. He then sold his grocery business and decided to fulfill his dream of becoming a full-time professional magician. Paul Daniels television debut came in 1970 on the talent show Opportunity Knocks, in which he came second. His act was spotted by TV producer Johnni Hamp who offered Daniels a regular spot on The Wheeltappers and Shunters Social Club which was presented by the controversial stand-up comedian Bernard Manning.

ITV gave Daniels his first show in 1978. Entitled Blackpool Bonanza, the show aired on a Sunday evening. During the same year, the BBC also offered him a weekly slot in the series For My Next Trick, alongside other magicians and singer Faith Brown.

In 1979, Daniels starred in a summer season show in Great Yarmouth with his new assistant Debbie McGee. It was also in 1979 that Daniels really made the big time with the start of his long-running and popular series The Paul Daniels Magic Show. The show ran for 14 series until ratings slumped during the 90s and the BBC pulled the plug in 1994.

Indeed, during the 90s viewers had started to become tired of the traditional forms of entertainment that were popular in the 1970s and 80s. Many old school comedians, magicians, cabaret and circus acts were pushed aside for a new wave of entertainers. 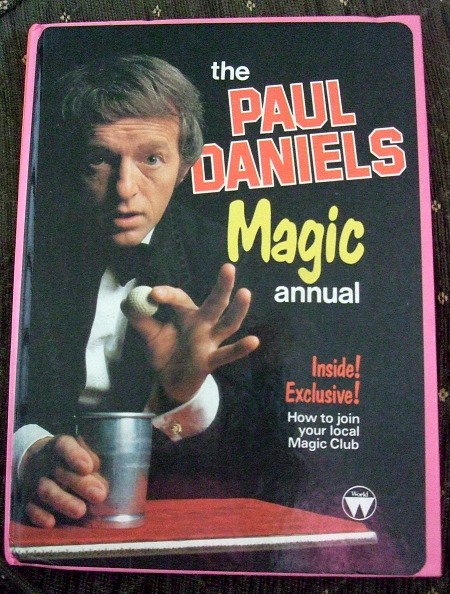 Paul Daniels in the 80s

Cast your mind back to 1987, and you may remember a Halloween Special of The Paul Daniels Magic Show which caused much controversy at the time. Paul attempted to recreate an illusion by Houdini in which he tried to escape from an Iron maiden (the torture device, not the band!) and made it appear that he had failed to escape from the device and was, therefore, killed. A later broadcast showed that he had escaped and we all breathed a huge sigh of relief - well, most people, at least!

From 1986 to 1988, Paul and Debbie both starred in 27 episodes of the children's TV series Wizbit. Daniels owned the theatre in the fictional town of Puzzleopolis, which was inhabited by walking and talking cards, magic wands, dice and sponge balls etc. Wizbit was a yellow Wizard's hat played by Tony Friel. 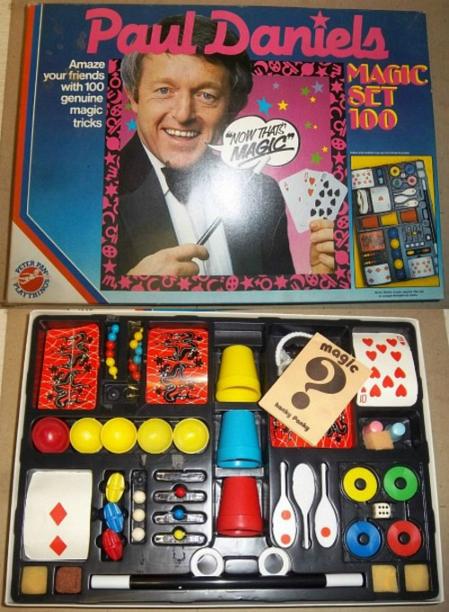 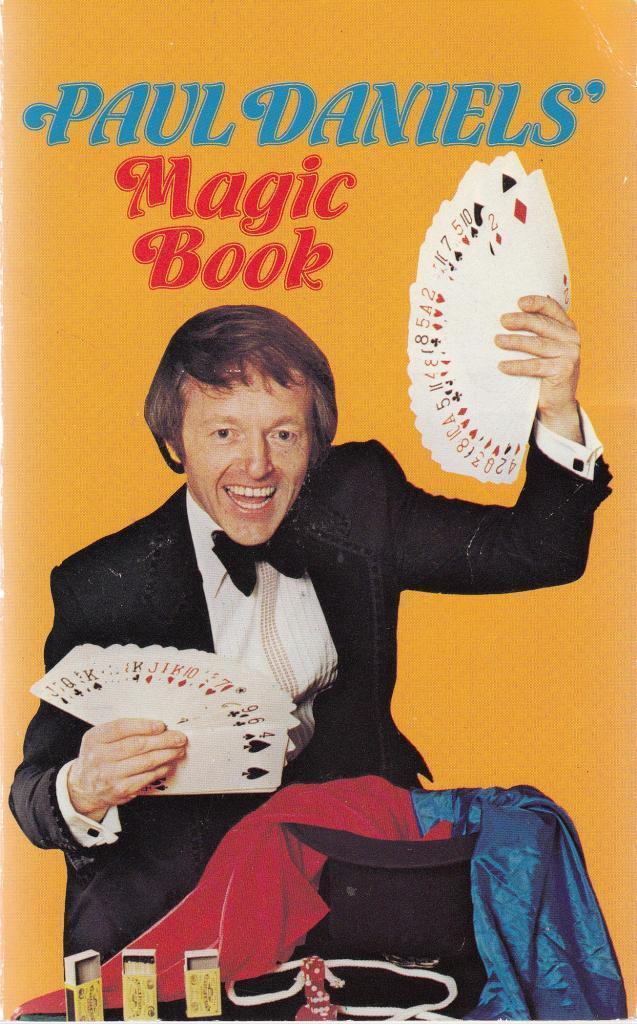 Paul Daniels' Magic Book (1980) Piccolo Books paperback. I was fortunate enough to receive this book for Christmas, although being a person who is more comfortable being behind the scenes than on stage, my attempts at pulling off the magic tricks inside it were atrocious - I would have made a very bad magician, and the only item an audience would want to see disappear is myself!

This popular BBC game show aired for nine series (143 episodes including a Christmas special which was shown on Christmas Day in 1986) and ran from 8th February 1986 until 29th October 1993. You can watch a rare, full 30 minute episode in the video above which was broadcast on 28th July 1993 - watch out for the interesting 90s fashion. The show was based on the American game show of the same name. In each episode, three married couples would compete to win seconds of time. The couple with the most seconds accumulated went through to the final round to win prizes, with the other two losing couples taking home watches and clocks. 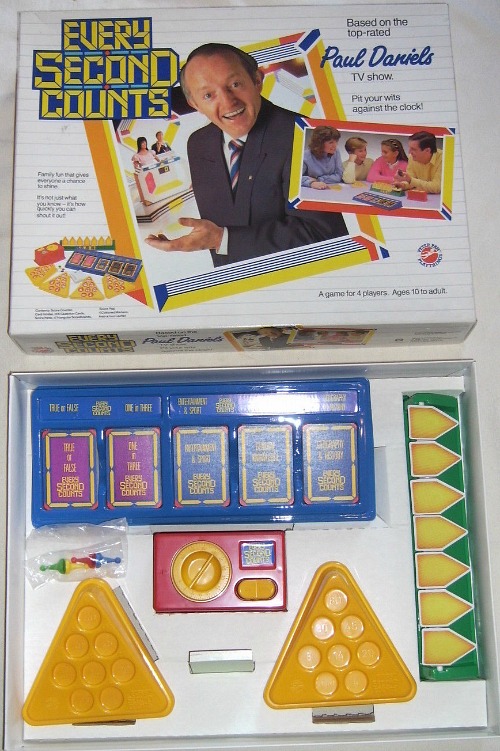 Every Second Counts board game 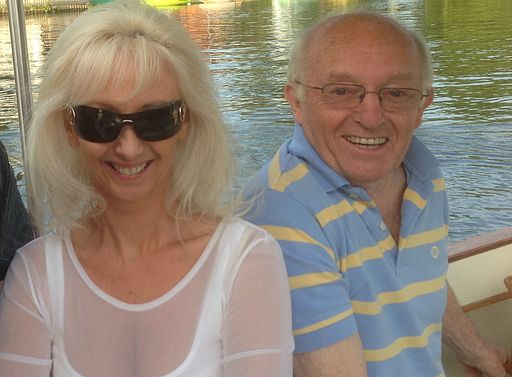 Paul Daniels: Under No Illusion - My Autobiography