This free flash game won't work on smartphones or tablets, but if you're on a PC then stay right on this page and enjoy a real blast from the past for free.
Phoenix was like an advanced version of Space Invaders and was released into the arcades in 1980. Developed by Amstar Electronics (who were based in Phoenix, Arizona) the game had a similar feel to Namco's Galaxian which was released in 1979.
Phoenix was critically acclaimed, with even the Atari 2600 version (released by Atari in 1982) also receiving high praise.
I remember playing this game in the arcades at the seaside while on my summer holidays. My parent suggested that I should be outside enjoying the sunshine and paddling in the sea. However, shooting alien birds was a lot more fun to me, especially as the only video game I had played at home was Pong. In the late 70s and very early 80s, the only opportunity that most kids had to play half decent video games was at an arcade, or in a motorway service station.
The level that everyone looked forward to in Phoenix was when you were pitted against the mothership, which was controlled by an alien which sat in its centre. I remember groups of kids gathering round to watch as I desperately tried to destroy the ultimate enemy craft, which was slowly moving toward my ship. Around the mothership were alien birds protecting it. Destroy these and a new wave would appear, so it was vital to destroy the protective shield so that you could wipe out the alien controlling the ship. My audience may have been enjoying the battle, but I probably left the arcade with a brown stain in my pants!
How to play
Click your mouse over "New Game" to start. Use the arrow keys to move your spaceship and the CTRL button to fire. Press the up arrow button to activate your shield (when available). Fire at the enemy craft and avoid crashing into them and dodge the missiles.
Phoneix Space Ship Shooter Game
As with the majority of space shoot-em-ups from the era, the player takes control of a spacecraft which fires upward. In phoenix, your enemies are birds, some of which will attempt to dive into you. Activating your shield will freeze your ship for around five seconds, but it will destroy any kamikaze birds that crash into you - use it wisely. 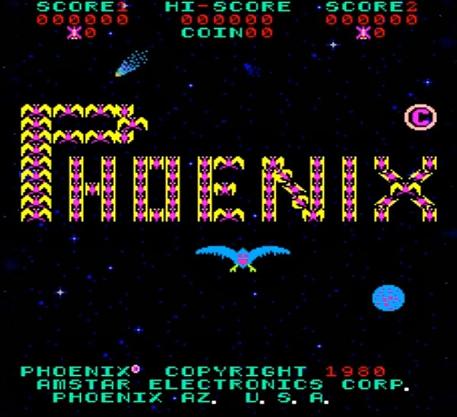 Title screen from the arcade version