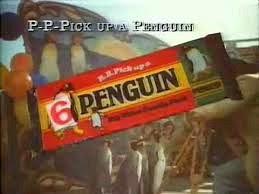 One ad break that just about everyone remembers from their younger days featured the slogan and song "P-P-Pick Up a Penguin". Yes, it was once very fashionable to be seen picking up a penguin, but not a real one, of course!

I was never quite sure why a chocolate covered biscuit bar was named after a flightless bird, but as I grew older, I realised that it was a genius marketing idea - many of us still remember the song and slogan several decades later. In fact, that slogan is still used by McVitie's on the front of the packaging today, although I haven't seen any TV ads in a long time.

I used to regularly find a Penguin in my school lunchbox. This was a fine way to end a delicious lunch which often included cheese and coleslaw sandwiches and a packet of Quavers. This was then washed down with a carton of Um Bongo - they drink it in the Congo, don't you know!

The advert that originally featured at the top of the page was from the 1970s and featured the voice of Derek Nimmo. Sadly, it was taken off Youtube, and I've had to remove it. But here's another one instead...
This advert also features Derek Nimmo singing "P-P-Pick up a penguin" and has a fairground theme - did you spot the advert for Cor!! on the ride?
If I couldn't find a Penguin in my lunchbox, then chances are there was a football-themed United biscuit instead, and this featured a blue and white striped wrapper. I was never quite sure why it wasn't red and white to represent the colours of Manchester United. One of my all-time favourites, though, was the orange Club biscuit - who else enjoyed nibbling the chocolate off from around the edges?

P-P-Pick Up A Penguin T-shirt for Adults

You may (or may not!) be pleased to know that those of us old enough to remember the adverts can let the memories live on by wearing a quirky retro T-shirt featuring the Penguin biscuit imagery from the 70s and 80s. It's also available for women in a whole range of sizes, although in just the one blue colour.
You can see a whole range of retro cartoon T-shirt ideas for adults on this website.You may also be interested in our page about 80s food, which features oodles of pictures and video clips which will, no doubt, stir up quite a few memories.