PIXIE AND DIXIE AND MR. JINKS

A good many cartoons that were being aired on British TV during the 1970s and into the 80s were created by Hanna-Barbera, with quite a few originating in the 1950s and 60s.

Season 1 of Pixie and Dixie and Mr. Jinks was first broadcast in 1958 in the U.S., but the timeless comedy can still be appreciated today. The animation is best described as a budget version of Tom and Jerry, but with less of the violent slapstick and more emphasis on the funny dialogue.
The three lead characters in the cartoon were the mice brothers, Pixie and Dixie and Mr. Jinks (an orange cat who was always wearing a blue bow tie) who is probably best-remembered for his grammatically inaccurate catchphrase "I hate those meeces to pieces!". In fact, he amusingly referred to the mice as "meeces" quite regularly in each episode. Although headstrong, Mr. Jinks is rather dumb and not much of a threat to the two mice.

Daws Butler was also responsible for the voices of many other well-known Hanna Barbera cartoon characters including Yogi Bear and Huckleberry Hound. Sadly, he is no longer with us and died on May 18th 1988 aged 71. Don Meddick also contributed his voice to other characters including Bamm-Bamm and Hoppy in The Flintstones, Muttley (who can forget that chesty snigger!) in Wacky Races and Dastardly & Muttley and Papa Smurf in The Smurfs. Meddick is also no longer with us and died on October 24th 1997 also aged 71.

There were three seasons (57 episodes) of Pixie and Dixie and Mr. Jinks in total which were first shown from 1958 to 1961, but, thankfully, regularly repeated during my 70s childhood.

The three characters also made a number of guest appearances in other Hanna Barbera cartoons including Yogi's Treasure Hunt and one episode of The Yogi Bear Show entitled Yogi's Birthday Party. They characters also featured as members of the Yogi Yahooeys in Laff-A-Lympics which first aired in 1977 - another fondly-remembered cartoon. 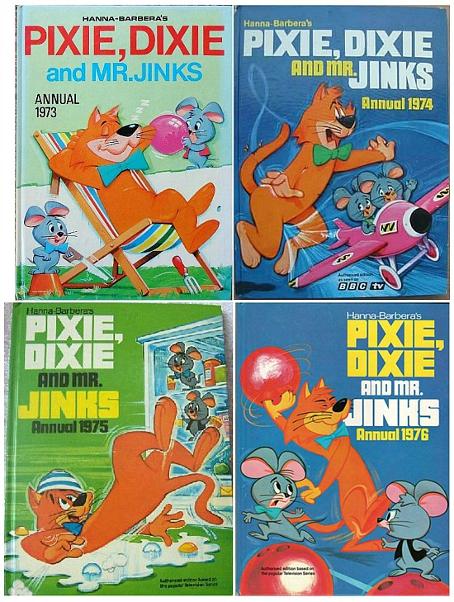 The eagle-eyed among you may have noticed that on the cover of the BBC TV 1974 annual Mr. Jinks is wearing a green bow tie. I've also seen imagery of him wearing a pink bow tie, too. On the 1975 and 1976 annuals Dixie's waistcoat is black rather than red. If anyone knows why this is so then please do leave your comments on this page - thank you! 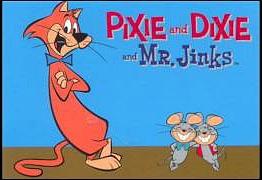 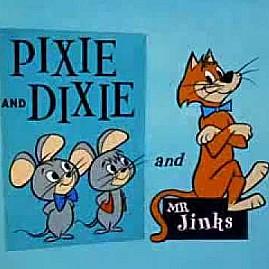 The Flumps
Scooby Doo Where Are You?