Popeye was a platformer that was originally released into the arcades and on the NES by Nintendo in 1982. However, in the UK and Ireland, the game was licensed to Atari who released the game using their own cabinets. The game was ported to the Commodore 64, Atari 8-bit home computers, Atari 2600, Atari 5200, Intelivision and Colecovision to name but a few.

The idea of the game was to try and win Olive Oyl's love. She can be found dropping tokens of love from the top of the screen which Popeye needed to collect. There were many obstacles to avoid, including his arch enemy Brutus, but if Popeye collects some spinach he can knock him out by running into him, temporarily.

Unusually for a platform game, there was no jump button, and popeye could only move to each platform by using the stairs. A four way joystick was used to move Popeye. The punch button did not actually let Popeye punch Brutus. Instead, this was used to destroy dangerous objects are thrown at him, and also the vultures. 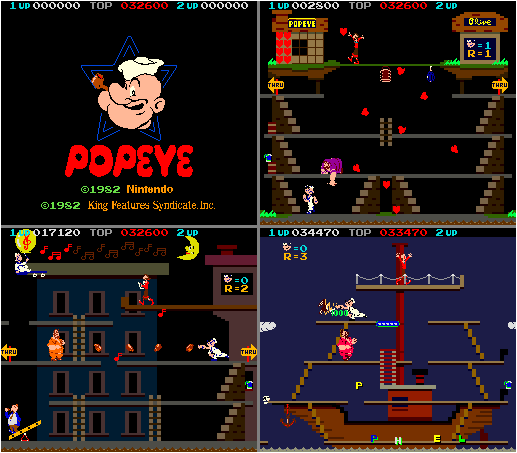 Screenshots from the Arcade version.

The cosmetics of the game were above average compared to other platformers of the time and were praised by most critics. However, the reviews for the gameplay were a little more mixed, but overall, the game was well-received and rated quite highly.
Parker Brothers released a board game based on the arcade game during 1983.

POPEYE ON THE ATARI XL/XE (BY PARKER BROS)

Comparing the C64 and Atari XL/XE version, the C64 version looks slightly better in the graphics department (the love hearts look more like hearts, for a start!) but the animation of the characters definitely looks better to me on the Atari version - see what you think!

Now this definitely looks to be the best of all the 8-bit versions of Popeye. The graphics, animations and music are all pretty decent, although the Atari version still looks the fastest. This was one of the first games to be released for the NES console, and was released around the same time as Donkey Kong.
Interestingly, the characters from Popeye were initially going to be used in the Donkey Kong video game, but Nintendo could not license them. 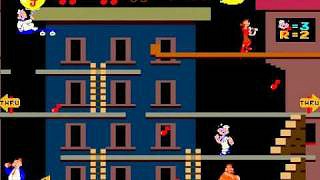 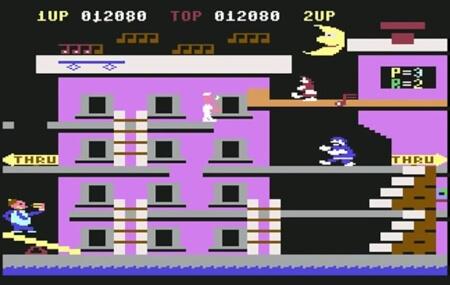 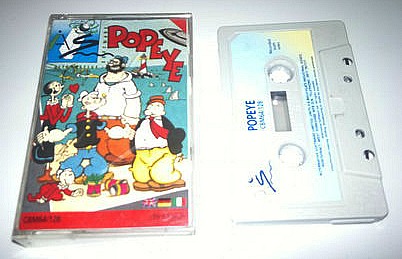