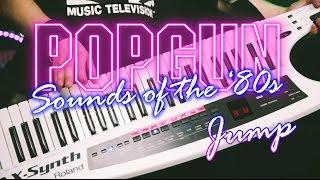 POPGUN SOUNDS OF THE '80S

I would like to start by saying that this is the very first review I've written about an 80s tribute band, so it's definitely a learning curve for me. I recently received an email from Popgun's drummer (and vocalist) Simon Lipscombe explaining that the band was looking for more exposure in the 80s community. Well, I'm very happy to help out and hope that this review will lead to a few more bookings, at least.

To be honest, the only tribute acts I have ever listened to were a few half-baked metal tribute bands in my local pub back in the 1990s, and a few dodgy videos on Youtube, so I haven't really had the best of experiences with them!

So, I was more than pleasantly surprised by the sound emanating from my speakers when I listened to Popgun's cover of Bon Jovi's Livin' on a Prayer through Youtube. In fact, I was totally blown away by what I can only describe as possibly the best Bon Jovi cover you're ever likely to hear! Donned with 80s attire including Wayfarers and studded leather jackets, the band certainly look the part, but it's their enthusiastic and incredibly tight performance that really stands out. Indeed, everything about this band exudes professionalism, including their impressive, neon-influenced website - both the band's name and their accompanying logo are very smart indeed.

Of course, you can't make a judgement about a band based on just the one Bon Jovi cover, so would I be equally as impressed with their other performances?

I decided to stay with the hair metal genre by listening to the band's cover of Van Halen's Jump, a song I first listened to on the jukebox at our local Youth Club back in 1984. Once again, I was pretty astonished by Popgun's version, and they have managed to reproduce that big lead synth sound (originally created using an Oberheim OB-Xa) just perfectly. There is also some delicious guitar work, too, not only on this track but on all of the three tracks that I listened too.

Now, I just love the energy and quirkiness of the B-52's (their Cosmic Thing album hardly ever stopped whirling around on my car's cassette player during 1989), and so I was particularly interested to see how Popgun would capture their sound.

The aformentioned Simon the drummer provides the Fred Schneider vocals, and bearing in mind that the sprechgesang (spoken singing) style is particularly difficult to get right, he does a particularly good job - impressive stuff - and he even sounds like him!

Lead vocalist and Roland AX keytarist, Phil maher, also has the difficult task of providing Kate Pierson's lead vocal. Of course, for obvious reasons he's never going to sound like her, but he certainly has the energy and enthusiasm needed to pull off an excellent performance in his own style. The band's quirky 80s attire also matches well with the fun style of the song, especially the bassist's TV test card jacket worn over a Frankie Says Relax T-shirt - perfectly 80s.

Overall, I was extremely impressed with these guys, and If you're looking to book an 80s tribute act (maybe for a wedding or university) then I can certainly recommend them. Their highly authentic sound and eighties fashion style, combined with a scintillating, professional performance make for a truly stunning act - book them now!