While many people in the mid 1990's were asking the question "Oasis or Blur?", the answer that I would have given would have been Pulp. Different Class was an aptly-titled album that was a league above. Packed with clever, observational lyrics, this is what "Cool Britannia" should have been about, and not the media-led frenzy over those other two bands.

There was only one thing that Jarvis Cocker could do to surpass this album, and that was, of course, to moon on stage at the 1996 Brit Awards during Michael Jackson's performance!

Released on 22nd May 1995, Common People was Pulp's biggest hit single, reaching #2 in the UK singles chart. The song was released as the lead single from the album Different Class. The chorus was originally created on a Casiotone MT-500 home keyboard by the band's frontman Jarvis Coker, who also wrote the lyrics. This eventually became a huge production by Chris Thomas, with many layers of synths and instruments spread over 40 separate tracks in the recording studio.

The B-side featured the song Underwear, with the vinyl 12 inch also containing two extra remixes of Common People. The CD version was released on two discs, with CD2 featuring acoustic versions of Razzmatazz, Dogs Are Everywhere and Joyriders. 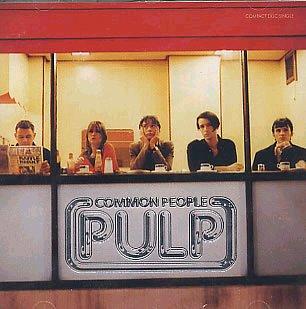