Queen "I Want It All"

"I Want it All" was the lead single from Queen's thirteenth studio album The Miracle. It was released on May 2nd 1989 in the UK, entering the singles chart at No.3 on 7th May. In the same week, The Bangles "Eternal Flame" was at No.2,and "Kylie's "Hand On Your Heart" was at No.1. Queen fell to No.5 the following week.
In the U.S., the single was released on May 11th, and reached No.50 on the Billboard Hot 100. The single also reached No.2 in The Netherlands, No.3 in New Zealand, and No.3 in Ireland, and was a top 10 hit in several other European countries, and also in Australia.

The track features a heavy rock sound, with Freddie's vocals having a gritty edge to them. Brian May shows off his sublime guitar rolls, and also duets with Freddie in parts of the song. It's certainly one of the band's finest tracks, and a superb choice for lead single.

The track was written by Queen's legendary lead guitarist Brian May, although was credited to Queen on the record sleeve. It was penned before the band had even entered the studio to record the rest of The Miracle. The track was produced by David Richards, who helped to co-produce the album alongside Queen. He also co-produced the band's 1986 album A Kind of Magic, and the album "Barcelona" by Freddie Mercury and Montserrat Caballé.

The lyrics to I Want It All divide opinion, and some reviewers of the day suggested that they were about the excessive nature of the 1980s, although others have suggested the song is more about ambition and drive. Brian May once stated the lyrics were inspired by his wife, actress Anita Dobson (who played Angie Watts in Eastenders), who said "I want it all, I want it now" quite a lot, apparently!

The video was directed by David Mallet, and filmed in Elstree Studios, London during March 1989. Mallet had previously directed a number of video for the band, including "Who Wants to Live Forever" in 1986, "I Want to Break Free" and "Radio Ga-Ga" in 1984, and "Bicycle Race" in 1978, to name but a few.

The song was never performed live by the full band due to Freddie Mercury's declining health. However, it was performed by the remaining band members after his death at The Freddie Mercury Tribute Concert on 20th April 1992, with The Who's Roger Daltrey taking over the lead vocals and a guest appearance by Tony Iommi from Black Sabbath on guitar. 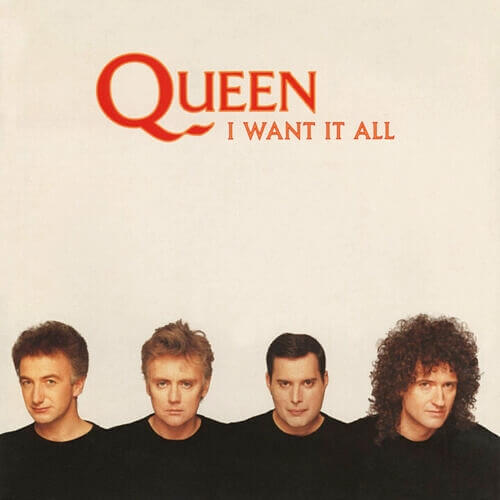 The B-side on the 7 inch and 12 inch vinyl single features the track "Hang On In There". The 7 inch single version of "I Want It All" lasts for 4:01, which is 40 seconds shorter than the original album version at 4:41. Both the single and album versions are include on Side A of the 12 inch vinyl. A 3 track picture CD was also released.

Under Pressure with David Bowie

I Was Born to Love You