The English rock band reached #8 in the UK (#21 U.S.) with this haunting tune, which was the second single to be lifted from the No.1 best-selling album OK Computer. Released on 25th August 1997, the song received mainly positive crticism. Acoustic guitar and piano are very much the main instruments in the track, and although the lyrics are about Karma and capitalism, according to Radiohead the song is not 100% serious. The lyrics relate to the idea that when you are stressed out by the boss of a big company, you can always call the fictional "Karma Police", so it it has a humorous side.

There's no doubt that Radiohead's sound has been influenced by bands such as Nirvana and The Pixies. OK Computer is an album that divides opinion. While some fans see it as the greatest album ever recorded, others believe it stinks and was over-hyped. The safest bet for me is to sit on the fence and say that it lies somewhere in between - what a cop out!

However, while I don't believe it's the best album of the 90s, it certainly lives up to some of the hype, at least, and it certainly doesn't stink. Unlike The Bends, this is an album that takes a while to get into. Many of the songs are not as instantly appealing, but be patient and you will be musically rewarded. At times it's psychedelic, at times it's quite dark, but the songs grow on you, and when they do you will change your entire opinion from when you first listened to the album. 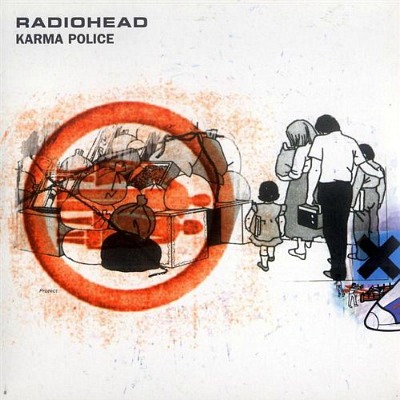