Not to be confused with Living in a Box, Red Box were originally active from 1983 to 1990, but reformed in 2010 without the original member Julian Close. They released one album in the 80s entitled The Circle & The Square which reached #73 in the UK album charts. Four singles were released from the album, but only two became major hits. In 1990, the band released their second album Motive.
Despite the poor chart performance of their debut album, it received much praise from the critics and featured a blend of quirky, hook-laden ethnic rhythms, 80s synthpop and thought-provoking lyrics. It's a thoroughly enjoyable album that deserved to be commercially successful, and it's a lost gem from the 80s that needs to be discovered by more people.
Released by Sire Records, "Lean On Me" is an uplifting song with a very strong hook, and it's certainly a tune that just about everyone remembers from the 80s.
The unusual video was nominated for the "best video" award at the 1985 Brit Awards. In it, we see lead singer Simon Toulson-Clarke in the foreground with Julian Close sat on a bench. Using metamorphic imagery, the two band members swap places. People originating from different countries also feature in the video and there is heavy use of special effects. At one point we see just the head and hands of Close while he is doing sign language.

According to Wikipedia, the single spent over a month at No.3. However, according to the official charts, the song spent just one week at No.3.
"Lean In Me (Ah-Li-Ayo)" entered the UK singles chart on 11th August 1985 at #79, and slowly climbed to its peak position of #3 for one week on 6th October. The single spent a total of 15 weeks in the top 100. The follow-up single "For America" reached #10 in 1986. Two further singles were released in 1987. "Heart of the Sun" reached #71 and Chencko (Tenka-Lo) reached #77. The original version of the latter single had been released in 1983 but failed to chart.
Early Days
Simon Toulson-Clarke formed his first band with his School friend Paddy Talbot when he was just 13. They performed a mix of covers and their own material. After leaving school, Toulson-Clarke formed a hard rock band in Middlesborough.
During the 1970s, Toulson-Clarke and Julian Close were studying at the Polytechnic of Central London and formed the band Harlequin with old school friend Paddy Talbot, Rob Legge and Martin Nickson. The band changed their name to Red Box and released a debut single "Chenko" with Cherry Red records in 1983. The band signed to Sire in 1984 and became a duo with just Toulson-Clarke and Close remaining.

In this second video, you can see the duo performing on Top Of The Pops in 1985. 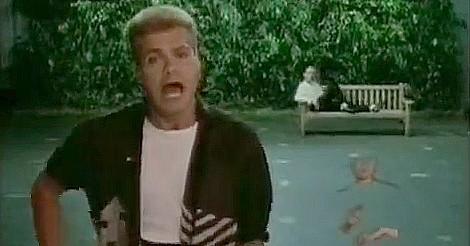 Lyrics for Lean On Me

Halo James - Could've Told You So