It's hard to believe that this very memorable song from 1987 peaked at an unremarkable #39 in the British singles chart. "It's The End Of The World As We Know It" faired even worse in the band's home country (the U.S.) only managing to reach #69. However, I guess that the chart compilers were rather glad, as they had to spend less time worrying about how to fit in the long-winded song title into their chart!

The track was R.E.M's second Top 40 single in the UK and later featured on the 1988 compilation album Eponymous. The song was released as the follow-up to the more successful The One I Love, which was released as the lead single from the band's fifth studio album Document.

In the video we see a skateboarding teen with a basin haircut messing around with the junk left behind in an old, abandoned farmhouse after an earthquake, and also lying on the the floor with a dog who tries to lick his face. I guess, this depicts the fact that the boy is "feeling fine" after the disaster.

The video was produced by James Herbert (not to be confused with the well-known horror writer) who produced a number of videos for R.E.M. during the late 1980s. 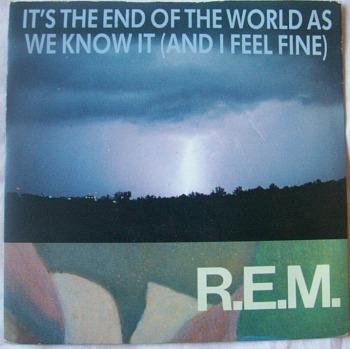 I remember a friend of my friend (who's name I can't remember) driving us to a nightclub in Stratford-Upon-Avon during the summer of 1988, if I remember correctly, with this song blasting out of his car stereo. When I say "blasting", believe me it really was, and it nearly destroyed my ear drums! Anyway, I'd never really paid any attention to the band before this, but he was responsible for turning me into a fan. So thank you, whatever your name was!