"Push It" was Salt-N-Pepa's first major hit in the UK, although the song's initial release early in 1988 only reached No.41, but was more successful on the Billboard Hot 100 in the U.S., where it reached No.19.
After the group performed the song at the 70th birthday concert for Nelson Mandela, the single re-entered the UK singles chart at No.24 on 19th June, eventually reaching No.2 on 10th July, where it remained for three weeks. It was held off the top spot by "Nothing's Gonna Change My Love For You" by Glenn Medeiros.

During the late 80s, an increasing number of dance, hip-hop and rap singles borrowed or sampled lyrics or musical parts from other songs.  Some of the lines in "Push It" were borrowed from other artists, including The Kinks song "You Really Got Me", as well as "There It Is" and "I'm A Greedy Man" by James Brown. The softer, whispered "Push It" lyric is sampled from a 1977 song entitled "Keep On Pushin'" by Coal Kitchen.
Now, I've been itching to mention this for some time. For a substantial period of time, I genuinely thought the girls were singing "Ah, bullsh*t", and actually kind of wish they were!
"Push It" featured on the trio's debut album Hot, Cool & Vicious, and this version lasts for 4 minutes and 30 seconds. The UK radio edit is almost a minute shorter at 3:28.
The album was the first by an all-female rap act to achieve both a gold and platinum sales certificate sin the U.S. Interestingly, the album failed to chart here in the UK, but the follow-up album A Salt With A Deadly Pepa reached No.19. 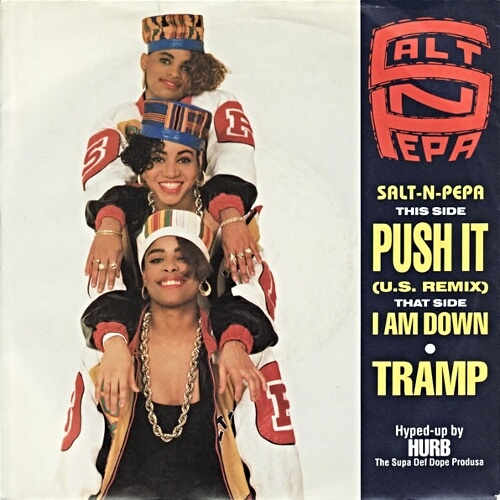 The single was released on the FFFR (Full Frequency Range Recordings) dance label in the UK, a branch of London Records that launched in 1986. The 7" was released as a double-A side with "Tramp", and featured the U.S. Remix on the A-side, with "I Am Down" and "Tramp" on the B-side. The 12 inch vinyl included "Push It" (Full Length Remix) and "Push It" (UK Mix) (The Shuv'd Mix) on the A-side, and "I Am Down" (Club Mix) and "Tramp" on the B-side. 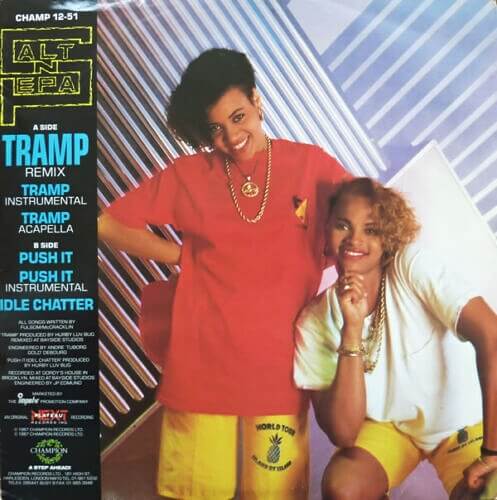 This is the previous single "Tramp" which was released with "Push It" as the B-side in 1987. It includes an instrumental version and "Idle Chatter" on the B-side. The A-side includes three versions of "Tramp".

Whatever HappeNEd to Salt-N-Pepa?

The group had further hits in 1988 with "Shake Your Thang" (no.22) and "Twist and Shout" (No.4), and another No.2 hit in 1991 with "Let's Talk About Sex".
Cheryl James was interviewed by The Daily Telegraph in 2019, and revealed that the group "Hated" the song "Push It" and thought it had "dumb lyrics". Daily Mail Push It article.
The original line-up of Salt-N-Pepa, Cheryl James (Salt), Sandra Dention (Pepa) and Diedra Roper (DJ Spinderella), performed in 2017-2018 during the UK's I Love the 90's Tour. DJ Spinderella was "terminated" from the group in January 2019, and in May of the same year, Salt-N-Pepa participated in The Mixtape Tour in the U.S., alongside headliners New Kids On The Block, Debbie Gibson and Tiffany.